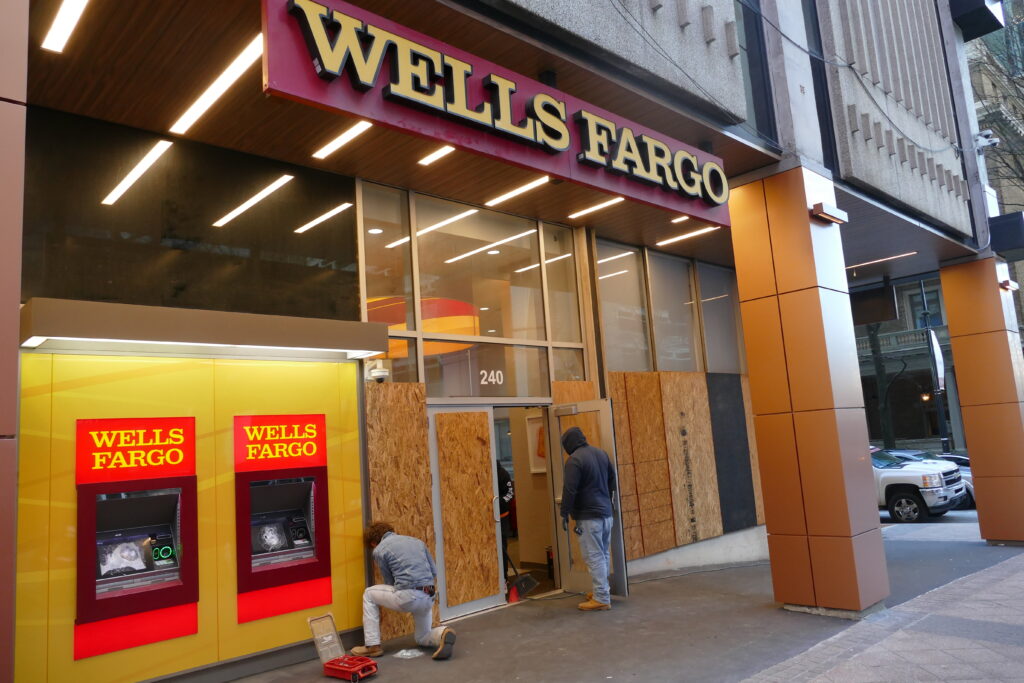 Workers boarded up shattered windows and doors at the Wells Fargo branch on Peachtree Street in downtown Atlanta Monday afternoon. The bank was apparently targeted by rioters for its support of the Atlanta Police Foundation, which backs a planned training center for law enforcement. John McCosh/Georgia Recorder

Leaders in Georgia are ready for action after protests over an Atlanta police public safety training facility erupted into violence and vandalism last week, including thrown Molotov cocktails, a patrol car set ablaze, a 26-year-old protester killed and a state trooper shot.

Georgia Republican Attorney General Chris Carr announced on Monday that he is preparing a case to bring domestic terrorism and multiple other felony charges against protesters who escalated a peaceful march into violence. Carr along with Gov. Brian Kemp and other lawmakers said protesters who caused damage to property in downtown Atlanta are facing serious felony charges that could serve as a warning to others who might escalate peaceful demonstrations to lawbreaking.

Protesters clashed with police in downtown Atlanta on Saturday night, destroying a police car and breaking windows in bank branches and a Peachtree Street office tower. In what police say represents the worst of “Stop Cop City” opposition for the new training facility, tensions heightened after the scene turned deadly on Wednesday when a Georgia State Trooper was shot and 26-year-old protester Manuel Esteban Paez Teran was shot and killed by troopers during a sweep to clear campers from Atlanta’s Intrenchment Creek Park. The 60-acre woods inside DeKalb County has had protesters who call themselves “forest defenders” encamped for more than a year.

Carr said the financial support behind a new training facility, which the Atlanta City Council also endorsed, strongly indicates the need to replace a center inside an old elementary school that leaks during a rainstorm.

“Here we have this group that has for over a year has been illegally sitting on this property and has been trying to stop the process of ensuring the community and law enforcement officers are safe and it’s gone on long enough,” Carr said Monday during an interview on North Georgia talk radio WDUN’s Martha Zoller Show.

“I’m confident that the facts will show these folks have engaged in DT and it provides for serious punishment and for a longer term if convicted,” Carr said.

The protesters behind “Stop Cop City” cite the project’s destruction of vanishing intown forest and desecration of native American ancestral grounds. An additional objection is the project will be located on the site of a former prison farm complex that was profitable due to the unpaid labor of incarcerated men.

A group of five Atlanta-area doctors, who are also involved with social justice organizations, wrote a letter saying the police’s response and ensuing narrative are all too common.

Police should stop unjustified use of toxic chemical irritants like tear gas, rubber bullets, and live ammunition against protesters encamped on the property, they said.

“This fits within the context of a disturbing pattern and threat to public health whereby the USA has one of the highest incarceration rates in the world; perpetuated by a judicial and legislative system that targets Black and Indigenous peoples, migrants, those living in poverty, those who are unhoused, as well as environmental and social activists,” reads the letter that included signatures from Georgia Human Rights Clinic co-directors and doctors Michel Khoury and Amy Zeidan.

The people arrested in downtown Atlanta over the weekend and during an earlier sweep at the disputed parkland are nearly all white and in their early 20s.

In the past two years, state lawmakers have considered legislation which would have tightened restrictions on rallies and protests and added penalties for people in the crowd even if they didn’t take part in illegal activity. Kemp and newly elected Lt. Gov. Burt Jones have both mentioned tackling violent crime as a priority for this session.

Georgia officials were quick to note that most of the dozen or so people arrested within the last week lived outside the state.

“Law enforcement demonstrated how quickly we shut down those trying to import violence from other states, and we’ll continue to do so,” Kemp said.

The violence and damage to property caused last week were condemned by several Georgia lawmakers Monday.

Republican Sen. John Albers said people have a right to protest, but they cannot block streets or worse without paying a price.