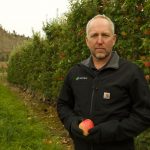 Michael Gilbert, founding CEO of Canadian agtech unicorn Semios, is leaving his post by the end of the month.

Gilbert announced the move on LinkedIn on Friday, and the search for a new Semios CEO is currently underway. While Gilbert is leaving as CEO he will remain on Semios’ board.

In his LinkedIn post, Gilbert said that he is stepping down to focus on his board responsibilities at Semios, as well as to two Canadian startups that he’s invested in, including Cascadia Seaweed Corp.

Founded in 2009, Semios was created to help farmers with crop loss from pests. It has since expanded to a total crop management solution, providing sensors that monitor and predict insect, disease, water, and frost risk of crops, in near real-time. These sensors are backed by a global network of field technicians, as well as Semios’ developers, researchers, and scientists.

In his statement, Gilbert said that Semios now covers more than 75,000 farms that total over $1 trillion in agricultural assets under management.

Under Gilbert’s leadership that spanned 13 years, Semios grew to become one of Canada’s leading agtech companies. It reached a $1 billion-plus valuation in September last year after its $100 million CAD raise, crowning the Vancouver-based startup with unicorn status.

The Globe and Mail reported that Gilbert owns between 20 and 30 percent of Semios.

As of 2021, Semios has raised $225 million CAD in total funding to date. This includes $25 million in growth capital financing that the startup secured from CIBC Innovation Banking, $100 million CAD in private equity capital that was raised in 2020, and an $8 million raise in 2016.

Over the coming months, Gilbert said he will be assisting Semios in its leadership transition and will be actively involved in the search for his successor. He added the Semios’ board will play a larger role in the coming future, with day-to-day oversight led by Ed Quilty, founder and former CEO of Aquatic Informatics.