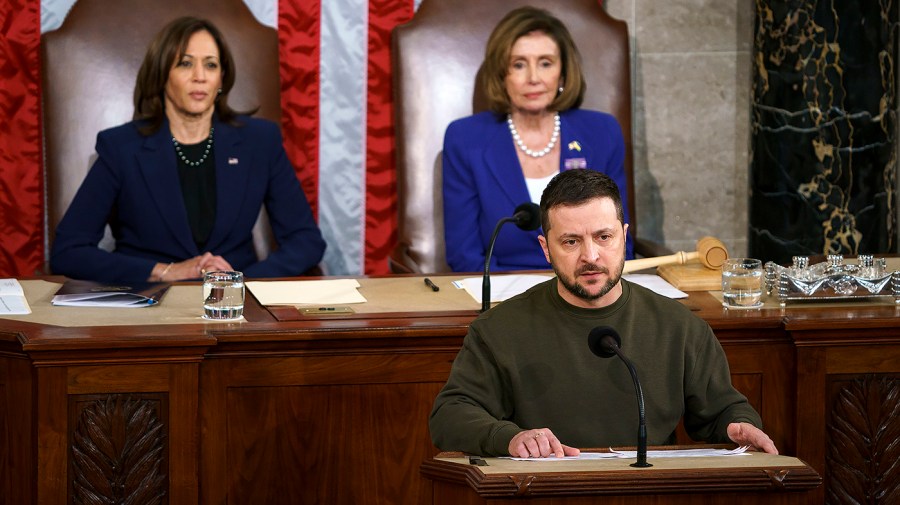 The visit, shrouded in secrecy until the last moment, was the first time Zelensky is known to have left his country since Russian President Vladimir Putin launched an invasion in February.

Zelensky arrived as the contours of the conflict are shifting.

Russia has been using drones to barrage Ukraine’s infrastructure, leaving much of the population without power or heat as the savage winter looms.

Almost 5,000 miles from Kyiv, Republicans are poised to take narrow control of the House in January — with one wing of the party deeply skeptical of the current level of U.S. aid.

Here are some of the big takeaways from Zelensky’s trip.

Zelensky’s physical presence in Washington had a power of its own.

The Ukrainian leader and his allies in the Biden administration made the most of the moment, both creating and reveling in the spectacle.

Biden greeted Zelensky on the White House’s South Lawn, walked him along the edges of the Rose Garden to the Oval Office and held a press conference alongside him.

Later, before his speech to Congress, Zelensky was shown the splendor of the Capitol by Senate Majority Leader Charles Schumer (D-N.Y.) and Speaker Nancy Pelosi (D-Calif.).

His speech itself was punctuated by applause from members of both parties and reached its emotional crescendo as he presented a Ukrainian flag, apparently from the front lines in Donbas and signed by the troops, to the chamber.

Zelensky was dressed in his customary military-style clothing throughout.

Symbolism may not get bills passed or aid delivered on its own.

But the imagery of the day underscored U.S.-Ukraine solidarity in an immediate, emotive way.

Biden’s bottom line: “As long as it takes”

Some Republicans have become louder in making the case that U.S. assistance to Ukraine should not be a “blank check.”

Biden’s position is a far different. Washington is there, he insists, for “as long as it takes.”

In the closing moments of Wednesday’s news conference, Biden sought to reassure Zelensky, telling him, “You don’t have to worry. We are staying with Ukraine as long as Ukraine is there.”

The White House sees the war in Ukraine as a struggle that simply cannot be lost, for fear that such an outcome would embolden Putin and expose American weakness to rivals and adversaries such as China and Iran.

The skeptics contend that the U.S. has no vital interests at stake in Ukraine, that the gush of money toward Kyiv is excessive and likely polluted by corruption, and that the war is a distraction from the plethora of problems at home that demand attention.

Those issues are going to play out in starker contest once the GOP takes over in the House.

But there’s no question over where Biden stands — even though he still refuses to entertain the notion of American boots on the ground inside Ukraine, directly engaging the Russians.

For all the noble rhetoric, there were elements of naked politics to the visit and its timing.

The White House obliquely acknowledged as much.

The night before Zelensky arrived, a senior administration official told reporters that the visit would be “an important injection of momentum.”

The momentum has the capacity to roll over critics, at least in the short term.

Those arguing against the $45 billion in aid as part of the spending deal, for example, are in an unenviable position. They are setting their faces against a wartime leader, internationally admired, who has shown unquestionable personal bravery.

For one day at least, he became the center of the American political world and pleaded for help.

The doubters may gain political traction in the months ahead.

But Zelensky’s visit puts them on the defensive for now.

Zelensky made significant overtures to Republicans

The Ukrainian president walked a fine line, expressing gratitude to Biden but also not tying himself so closely to the president as to make U.S. support for the war look like a Democratic-only effort.

Addressing lawmakers at the Capitol, Zelensky thanked those from both parties who had visited Kyiv and emphasized the need for “bipartisan” and “bicameral” support.

The overtures clearly weren’t going to win everyone over.

GOP firebrand Rep. Lauren Boebert (Colo.) sat down as Zelensky received a standing ovation upon entering the House chamber for his speech. Some GOP lawmakers didn’t show up at all.

Rep. Thomas Massie (R-Ky.) tweeted that he was in Washington but would not be attending the address, deriding Zelensky as “the Ukrainian lobbyist.”

A vague outline of a peace plan

The question of how the war ends is self-evidently huge, given that Putin seems determined not to back down and the chances of an outright Ukrainian victory seem slim.

Zelensky’s speech to lawmakers offered a hint — but a rather vague one.

He said that Ukraine had “already offered proposals.” He did not say what they were, but he said he had discussed them with Biden, the president was supportive of them and they included 10 points for “our joint security.” There was also mention of a summit.

But if that was intriguing, it also seemed clear that peace was some distance away.

Asked at the earlier news conference with Biden about the idea of a “just peace,” the Ukrainian president expressed some perplexity, musing on what that phrase might mean for his compatriots who had lost family members to Russian aggression.