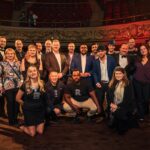 Through the newly announced fund, Holt Xchange plans to invest in Web3 startups at the seed and Series A stages that are using digital collectibles, blockchain tech, smart contracts, and non-fungible tokens (NFTs) to disrupt existing business models across the sports media and entertainment industries.

“I think there’s tremendous pressure coming off of the pandemic around content and entertainment.”
– Elisabeth Laett, Holt Xchange

In an exclusive interview with BetaKit, Holt Xchange founding managing partner Jan Christopher Arp and managing partner Elisabeth Laett outlined the firm’s plans for the fund. The firm’s thesis is centred around how sports media and entertainment content is “produced, aggregated, distributed, and consumed,” and creators and their audience interact.

Though the launch of this fund comes during a broader economic downturn as well as crypto and NFT market crash, Laett and Arp believe the timing is ripe to invest in this space.

“Even though we might have seen a little bit of a crypto winter, we’re still seeing a significant amount of investment happening in the metaverse … [NFTs], the blockchain structure, and smart contracts,” said Laett. “We definitely see the opportunity to participate in that momentum as well as look for key technology companies that are contributing towards it.”

Holt Xchange is currently fundraising for its Sports Media and Entertainment Fund, and while the firm declined to disclose target size, a source with knowledge of the dealings told BetaKit that Holt Xchange is aiming to secure $100 million USD. Holdun, the family office behind Holt Xchange, has agreed to serve as the fund’s anchor investor.

“We were surprised with the level of interest in early discussions that we had,” said Laett. “I think there’s tremendous pressure coming off of the pandemic around content and entertainment.”

With the Sports Media and Entertainment Fund, Holt Xchange is moving from traditional FinTech and expanding into Web3—with a FinTech lens.

As the anchor for Holt Xchange’s new fund, Holdun brings experience in sports and crypto as its own funds include the algorithm-based, sports betting-focused Innovation and Technology Fund, the private equity-like Holdun Opportunity Fund, and the Crypto Arbitrage Fund. The latter of which claims to take advantage of “the inefficiencies of the crypto market while maintaining a low level of exposure to the performance of the underlying crypto assets.”

“Through the whole big family office and our contacts—we have a very broad network in sports media and entertainment—we saw a lot of synergy with our investments that we’ve been making in FinTech, and FinTech as an enabling technology to be able to really have an impact in this market,” said Laett.

In addition to launching this fund, Holt Xchange is also establishing an “additional investment model” that it says will enable more investors to participate in its venture capital investments. Holt Xchange, which currently allows accredited investors and family offices to take part, plans to expand to eligible investors next year with the launch of its eligible investor platform, for which the firm has already opened its waiting list.

When it comes to the fund’s focus area, the market is a changing one. This year, the crypto market has been crushed: over $2 trillion USD in value has been wiped out and major players have become insolvent amid the collapse of digital asset prices. The NFT market has also crashed, impacting Web3 players like Dapper Labs.

“I’ve been refining the term crypto winter to call it the crypto tsunami,” said Laett.

But despite current conditions, Laett remains bullish on the future of crypto and Web3 technology, noting that she takes a “longer-term view” of what’s going on in the space.

“I really feel right now [like] the wave is pulling back and roaring itself up to come back three [times] stronger,” said Laett.

Amid economic downturns where valuations typically fall and venture investing becomes far less competitive during these periods, Laett and Arp feel Holt Xchange could have an opportunity to win allocation into high-quality deals.

For his part, Arp believes Holt Xchange’s timing is right given the “network, … intrigue, and momentum” that the firm has been able to build for this initiative. “It’s certainly trialling times, but we still have the confidence to continue forward,” said Arp.