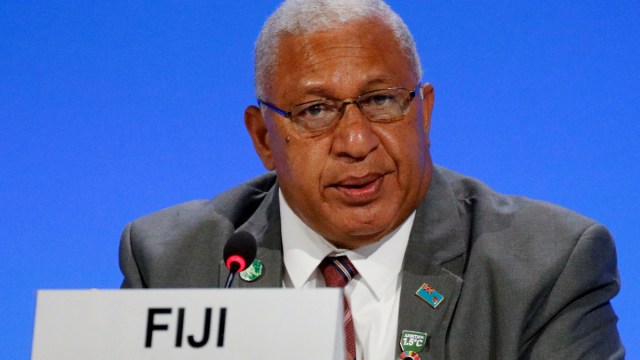 FijiFirst has garnered 42 per cent of the vote from the results of two-thirds of polling stations uploaded as of Saturday evening.

The National Federation Party has almost nine per cent of the vote while the Social Democratic Liberal Party has just above five.

The other five political parties remain below the five per cent threshold of votes required to qualify for a seat in the expanded 55-member parliament.

Bainimarama – who came to power after instigating a coup in 2006 – has a personal vote of 29 per cent in Fiji’s single constituency while Rabuka is sitting at almost 16 per cent.

Rabuka said he remains hopeful he will be able to form a coalition government.

A final tally is due on Sunday.

The fallout from Rabuka being taken into custody and questioned by police on Friday night after writing to the military commander asking for an intervention in the election has continued.

He said he was not arrested or charged.

The party’s general secretary was also taken in for questioning as was Methodist Church Reverend Ili Vunisuwai who also wrote to the president and army commander and expressed concerns about the integrity of the election.

Rabuka told reporters on Friday that police questioned him about his statements on the election, particularly in relation to social media posts.

“It’s an occupational hazard for a political opposition in Fiji,” he said when asked if he thought the developments constituted political interference.

Major General Jone Kalouniwai declined to get involved, saying using the military in the electoral process would be unconstitutional and he maintained faith in the system.

Chaudhry said he had people willing to sign statutory declarations saying they voted for him at a particular booth he recorded no ballots at when counted.

“I am personally confident hundreds of my votes have been hijacked or disappeared,” he said.

“That’s why I am alleging possible fraud.”

Supervisor of Elections Mohammed Saneem rubbished the claim saying he was still waiting for Chaudhry to produce evidence from when he alleged fraud in 2014 and 2018.

He said he’d received one complaint of that nature but the woman was looking at the wrong polling station.

Saneem said all political party observers were given two to three hours notice to leave because counting had finished.

He said proper legal avenues should be followed with recourse available to aggrieved parties but urged them to wait until the final results are released.

Opposition parties still have concerns over a glitch that caused the election results app to be taken offline on election night, with a substantial change to results when it came back online.

Saneem said votes had been mismatched to candidates when they were uploaded to the results app, causing some candidates to initially show unusually high numbers.

Saneem said while the app was down, a substantial number of polling stations reported their results which is what updated the overall tally.

He said there was no problem with the database as ballots are manually counted and verified. Extra safeguards were put in place after the glitch.

The Multinational Observer Group says it has not observed “any significant irregularities or issues during pre-polling, postal voting or election day voting”.

The organisation’s interim report noted the app is not used to count votes, only to publish results.

This article was made possible through the Melbourne Press Club’s Michael Gordon Journalism Fellowship Program.