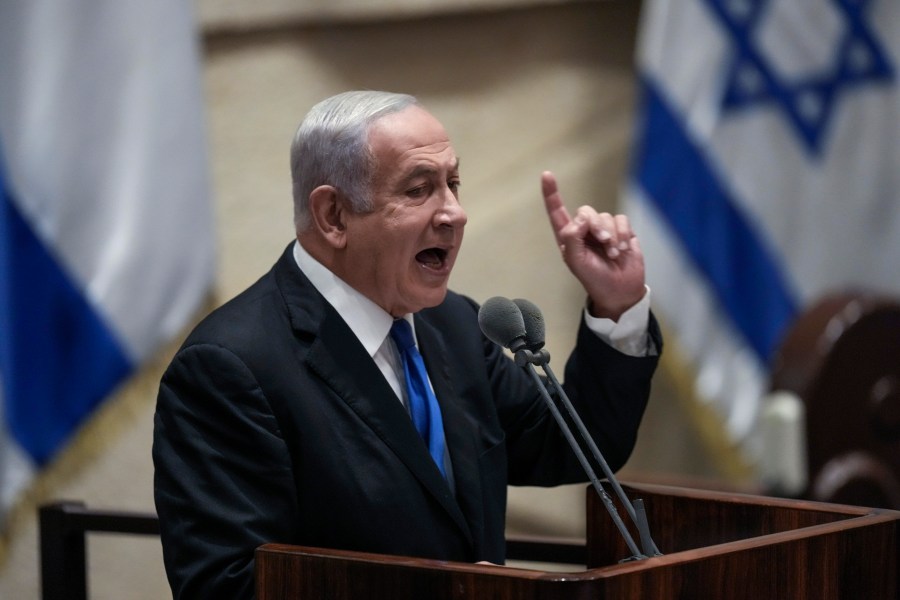 JERUSALEM (AP) — Israel is holding its fifth national election in under four years, and once again the race is shaping up as a referendum on former Prime Minister Benjamin Netanyahu’s fitness to rule.

Netanyahu has been campaigning while standing trial on corruption charges. As Israel’s opposition leader, he has portrayed himself as the victim of a political witch hunt and promised to reform a legal system he sees as profoundly biased against him. His main opponent, caretaker Prime Minister Yair Lapid, is marketing himself as a voice of decency and national unity.

In Israel’s fragmented political system, neither Netanyahu nor Lapid are expected to win outright majorities in the 120-seat Knesset, or parliament. That means each will have to turn to smaller allies in hopes of securing the 61 seats required to form a new government. Opinion polls say the race is too close to predict.

Here is a look at the potential outcomes of Tuesday’s election:

NETANYAHU WINS. Netanyahu’s Likud party and its allies, an extremist ultra-nationalist party and a pair of ultra-Orthodox religious parties, are projected in polls to come close to winning a parliamentary majority. If they can pull it off, Israel’s next government will be a narrow, but cohesive and well-disciplined coalition poised to take a hard line against the Palestinians, including Israel’s own Arab minority, cement Orthodox control over many aspects of daily life and attack the country’s legal system.

The leader of one of Netanyahu’s main partners, Religious Zionism, is Itamar Ben-Gvir, a lawmaker who has called for deporting Arab politicians and brandished a pistol during public run-ins with Palestinians. Another senior figure in the party once compared gays to wild animals. He later apologized, but has repeatedly made anti-gay comments and said he opposes “LGBT culture.”

Netanyahu’s allies have indicated they will try to take over the process of appointing judges and give parliament power to overturn Supreme Court rulings. That could pave the way to dismissing Netanyahu’s corruption charges.

Justice Minister Gideon Saar, a former Netanyahu ally turned bitter rival, says a Likud victory will mean “regime change” for Israel. “They don’t want evolution. They want a revolution that will destroy the independence of the courts and prosecution,” he says.

LAPID WINS. Lapid, the founder and leader of the centrist Yesh Atid party, faces a harder task than Netanyahu. His party is projected to finish a distant second to Likud and with his current allies appears poised to fall short of a parliamentary majority. That would require some creative thinking.

Lapid was the mastermind of putting together the outgoing coalition — a patchwork of small and midsize parties that banded together last year to oust the long-serving Likud leader. But members of that alliance, which included the first Arab party ever to sit in an Israeli government, had little in common. The coalition was torn apart by infighting after just a year in power.

Even if Lapid pulls off a miracle, he will once again have a difficult time finding common ground among members that include Arabs, secular and dovish Jewish parties that support peace negotiations with the Palestinians and hawkish hard-liners who oppose Palestinian independence.

GANTZ HAS A CHANCE. Since entering politics in 2018, former military chief Benny Gantz has seen his fortunes rise and fall. Initially seen as the great hope for ousting Netanyahu, Gantz later disappointed his followers by entering into a disastrous and short-lived power-sharing agreement with him. Gantz, currently defense minister, has now carved out a niche as the head of a midsized, middle-of-the-road party.

With one small Arab party unlikely to endorse either Netanyahu or Lapid, it is possible neither side secures a majority.

That is where Gantz could emerge as a power broker — and even an unlikely winner.

Gantz appears to be the lone candidate in the anti-Netanyahu bloc with some crossover appeal. He could potentially steal votes from Likud to prevent Netanyahu from securing a majority. And if that happens, he also could seek to lure ultra-Orthodox parties away from Netanyahu and into a coalition with Lapid.

BACK TO THE DRAWING BOARD. The parties have nearly three months to cobble together a new coalition. If they fail, Israel will return to the polls early next year and do it all over again. Beyond costing millions of shekels, the elections have exhausted Israelis and eroded their confidence in the country’s democratic institutions.