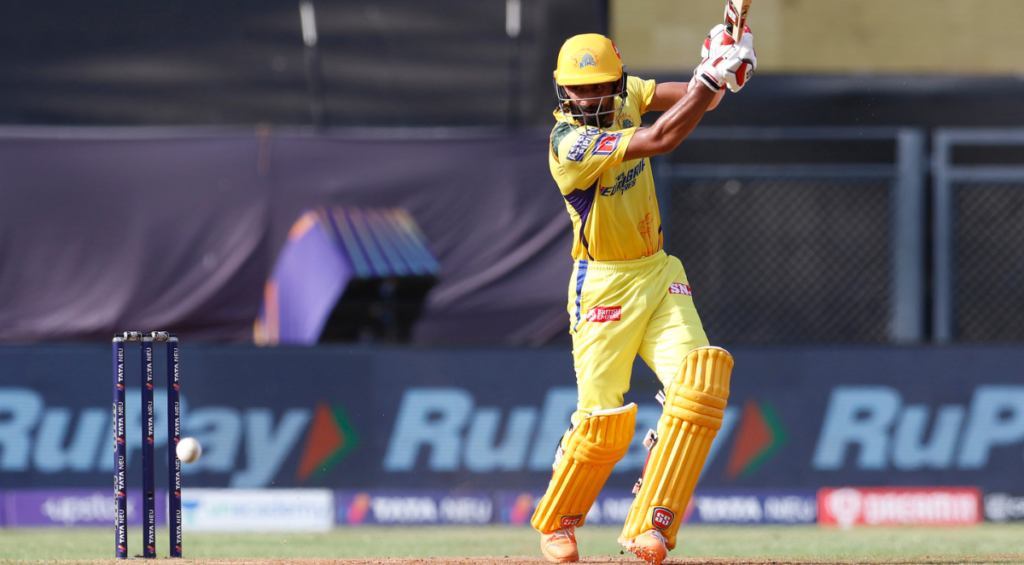 N Jagadeesan is the talk of the town after a stunning 2022 Vijay Hazare Trophy campaign. Released by Chennai Super Kings a few days prior to the tournament, he talks to Sarah Waris about his mindset during the edition and his learnings with the franchise.

Jagadeesan’s world record five consecutive List A hundreds marked him out as a batter of rare consistency. When he extended the last of those centuries into a jaw-dropping 277 – yet another world record, for the highest individual score in the format – people began to take notice.

Having used him as a floater for the first few years of his career, Tamil Nadu decided to promote their wicketkeeper to the top three seasons ago. He scored only three fifties and two hundreds until the 2021/22 Vijay Hazare Trophy, but he struck at 143 against spin in last year’s Syed Mushtaq Ali Trophy. Not a big hitter, he stuck to traditional shots, but the lack of power in his game proved to be a hurdle.

He struck at less than run a ball in the SMAT last year. After another ordinary show in this edition, he would have known that he was living on borrowed time, and was at risk of slipping away after his Indian Premier League career too had failed to take off.

Jagadeesan was one of eight players released by Chennai Super Kings earlier this month ahead of the 2023 IPL auction, bringing an end to a five-year association that had more misses than hits. Yet, as his career took a downward turn, he went on an unstoppable run-scoring spree, ending the Vijay Hazare Trophy with 830 runs at a stunning average of 138. The carnage, after playing just seven games in five years in the IPL, is symbolic of how he had been crying out for chances, waiting to burst and unleash his undeniable skills.

Looking back, Jagadeesan is able to be philosophical about his first taste of the IPL. At the same time, there is frustration and sadness as well. Acquired in 2018 at his base price of INR 20 lakh, Jagadeesan had to warm the bench for two years before making his IPL debut in 2020 against Royal Challengers Bangalore. Chennai Super Kings lost the match by 37 runs, but Jagadeesan was their second-highest run-scorer, making 33 in 28 balls on a difficult wicket when only two other teammates had a better strike rate.

The debut was a long time coming, and waiting for opportunities was not easy, he tells Wisden India: “Being on the bench definitely made me doubt myself, a hundred percent. I would keep thinking if I was good enough and if I would be capable of playing. But that all vanished when I played my first game against Royal Challengers Bangalore in Dubai. I scored 33, and all the doubts vanished. I was confident about myself, saying. ‘Okay, I can definitely play this bowling’.”

However, he played only six more games for Chennai Super Kings, spending all of 2021 on the bench before being released earlier this year. He admits to feeling hard done by with the lack of game time, but is keener to focus on the learnings from his time with the team: “On a personal point of view, yes, I could only wish that I had a lot more game time. But I think the other thing which we need to consider is also the team combination that CSK had each and every time they went in. So, even if they wanted me to play, I always had to be a fit in the team combination and I knew for a fact that the combination was not going to suit me, being a wicketkeeper especially. From a personal point of view, I would have hoped to play a lot more, but I don’t think I’ll be regretting it for a very long time considering the team’s approach.

“I think the learnings that I had while playing the game, even though limited, was a lot more than when I was sitting out so I definitely take that with me. It gave me a lot of confidence, making me believe that I’m capable of facing world-class bowlers. So that confidence was something that was very important to me.”

MS Dhoni has often emphasised on the value of following a ‘process’ to succeed in cricket. The word has had an impact on Jagadeesan as well: “I stuck to a process and kept following it. I’m someone who likes to have a lot of energy while playing but I tried to keep myself really calm without trying a lot of different stuff while batting. From being complicated, it became simple for me. I used to be very pumped up each and every time I went out to bat, I was trying to be aggressive. But, I learnt to be calmer while doing the same old stuff.”

Despite not being a regular member of the XI, Jagadeesan applauds the communication to him by the franchise and his captain. “Batting is always about adapting to the roles that are given to you by the team. Dhoni clearly told me the roles I would have if I played a game. If I had any doubt, I would always go to him and ask him for more clarity and even if there are any technical adjustments where I thought I could get better, in terms of hitting. He also gave me technical advice as a keeper, because we know his speed and agility. He’s helped me with my footwork as a keeper as well.”

Jagadeesan ended his stint with four-time champions Chennai with 73 runs at an average of 24.33 and a strike rate of 111. The numbers do not stand out. That, along with his below-par domestic returns in the last 12 months, put him at risk of falling further behind a stellar crop of India batters.

In the 2021/22 Vijay Hazare Trophy, Jagadeesan managed 253 runs at 31.62, which dipped to 25.50 in last year’s Syed Mushtaq Ali Trophy. Having scored 118 runs in six games in this year’s SMAT, he had to turn things around, for time was running out fast. The IPL auction on December 23 would have been at the back of his mind: “I didn’t have a lot of runs behind me going into the tournament. Be it in the SMAT and last year too, I got one hundred and one fifty [in the Vijay Hazare Trophy]. I didn’t have a lot of runs but, going into the tournament, it was very vital for me to keep it very simple. The more I think about runs, I thought I’d be putting a lot more pressure on myself.”

Being released by Chennai Super Kings expectedly affected him – but he also felt motivated: “For cricketers, it’s not easy to know you have been released by a side. I was thinking a bit about it, but I didn’t have a lot of time to crib because we had games continuously. I took a day or two to say, ‘Okay, this was not something under my control. It was their choice to release me. It will not move me.’ So I had to make peace with it. And, I took that in a positive way.

“Being there for such a long time, I got limited time. After a point, I wasn’t even bothered about the team releasing me. I was thinking that even if I’m not going to get picked for an IPL franchise this year, I still have two-three months where I can work, improve and grow as a cricketer and come back stronger next year.”

Chances may come again, given how he has managed to turn things around in the Vijay Hazare Trophy. He batted with uncharacteristic aggression, and the results were evident. Despite not being among the runs in this year’s Syed Mushtaq Ali Trophy, he ended with a strike rate of 131, the best from Tamil Nadu with a 50-run cut-off. He even struck at 125 in the VHT quarter-final. He hit 31 sixes, the most in the competition until the semi-final, sending a message to IPL franchises teams looking for a wicketkeeper.

While he does admit to not being a natural striker, he continues working on his lacks: “When it comes to hitting, I’ve been training a lot. But at the same time, when it comes to domestic cricket, I think we need to consider the wickets. The wickets we played on in Lucknow weren’t the best: we played on turners. So obviously, the hitting will not come off. But overall, I’ve been putting in a lot of work towards that.

“Looking back at the tournament [Vijay Hazare Trophy], it’s a good feeling but while playing the only aim for me was to try and be in the present as much as possible without thinking of the future as to how many runs I was going to score and have a set target as to how much I need to achieve in the season. My aim was to try and keep it as simple as possible and while batting the only aim for me was to be very relaxed and calm.”

Such a run raises the question not just of another go in the IPL, but of India selection. Does Jagadeesan see himself at the top of the line-up in international cricket in future? For the moment, he’s keeping his cards close. “I’m trying to stick to the process as much as possible. The only thing that I can control is the way I play the game and the way I go to the gym and approach each and every game the same way I can. I just like to control the controllables, and if it happens well and good. If it doesn’t happen well and good. You still keep working.”

The maturity is laudable for someone his age. Perhaps it has to do with being around a personality like Dhoni for five years. Or perhaps it is an obvious outcome of a roller-coaster journey. Irrespective of the reason, however, an intricate knowledge of one’s own flaws and the understanding of destiny helps a player in their tough times. Jagadeesan seems to possess that in plenty. It is also why he is able to remain so grounded despite finishing a potentially career-changing campaign just a few days ago. Jagadeesan could have drifted away. Instead, he’s re-established himself as one of the most exciting young batters in the country.

The post Exclusive – Jagadeesan: ‘Being on the bench at CSK made me doubt myself – I would keep thinking if I was good enough’ appeared first on Wisden.