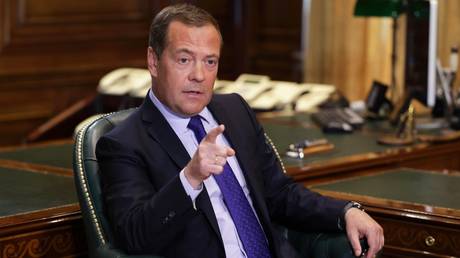 Such a scenario would only occur if Russia’s very existence was at stake, Dmitry Medvedev says

Moscow would only resort to nuclear weapons in four scenarios, all of which present an existential threat to the Russian state, former president Dmitry Medvedev told French media on Friday.

Speaking to the TV channel LCI, Medvedev was asked whether Russia’s military doctrine allows for using tactical nuclear weapons. The former president responded that Moscow’s nuclear posture has been made public, and there is nothing secret about it.

Commenting on the possible use of tactical atomic weapons, or arms containing depleted uranium, the former president noted that Russia has never put those into action, unlike some Western countries.

“Over the past 20-30 years, the NATO states have used them quite actively both in Yugoslavia and Iraq. There is some uncertainty around this topic, with very tragic consequences. So, in this sense, we must first look at what Western countries have done in certain situations,” Medvedev said.

The former president stressed that Russia’s response “will be consistent with the size of the threats this country is facing,” and that Moscow’s military offensive in Ukraine, which started in late February, is a defensive measure.

According to Medvedev, one of the reasons for the attack was a statement by Ukrainian President Vladimir Zelensky, who said at one point that Kiev does not rule out restoring its nuclear potential. “Apparently, he wanted to scare us, but in the end he created an even heavier atmosphere, which ultimately forced the Russian Federation to launch a special military operation,” he said.

Last week, Ivan Nechaev, deputy press secretary of the Russian Foreign Ministry, stated that Moscow has no need to use a nuclear option in Ukraine, and that Russia is a responsible nuclear power, which will only use its atomic arsenal if its very existence is under threat.