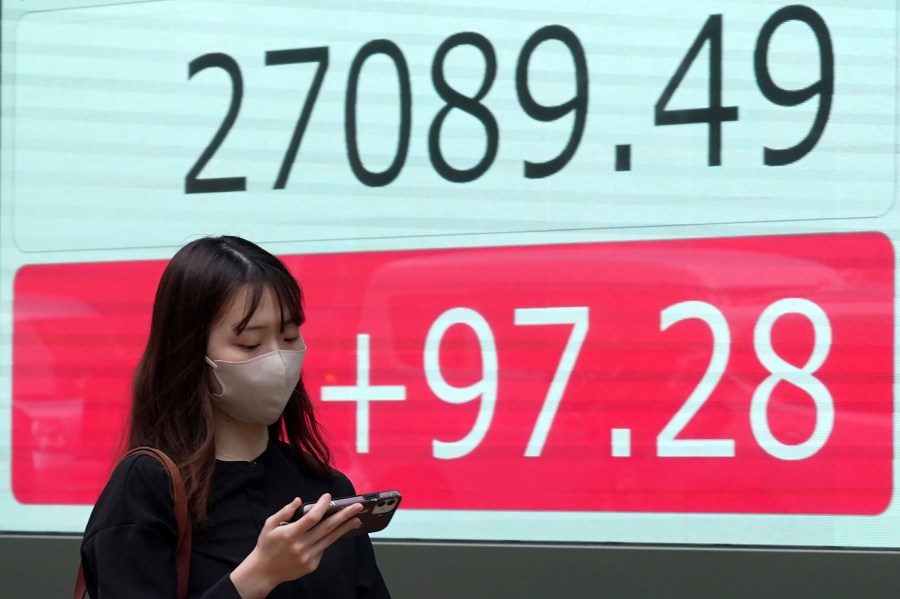 TOKYO (AP) — European indexes fell in early trading and U.S. futures were down as selling pressure kicked in Wednesday after a few days of strong gains.

Asian shares advanced, led by a nearly 6% jump in Hong Kong’s share benchmark as markets there caught up after reopening from a holiday.

Easing concerns about interest rate hikes by central banks have helped push markets higher in the past few days, but worries over inflation persist.

Oil prices rebounded from earlier losses, with a cut in oil production on the table as OPEC oil-producing countries meet Wednesday. The OPEC+ alliance that includes Saudi Arabia and Russia is weighing a cut of a million barrels per day or more.

Britain’s FTSE 100 fell 1% to 7,016.60 as British Prime Minister Liz Truss gave a speech defending the economic strategy of her new conservative government, including tax cuts that have roiled markets.

Truss said she will stick with her plan to reshape Britain’s economy through tax cuts and deregulation in a bid to end years of sluggish growth and create “a new Britain for the new era.”

New Zealand’s share benchmark rose 0.8% after its central bank hiked its benchmark interest rate to 3.5%, saying inflation remained too high, most recently at 7.3%, and labor scarce. The half-point rate hike was the fifth in a row by the Reserve Bank of New Zealand since February.

The Hang Seng in Hong Kong rose 5.9% to 18,087.97, catching up with gains elsewhere as markets reopened following a holiday Tuesday. Markets in mainland China remained closed for a holiday.

Analysts said the latest data on South Korea’s inflation may push the Bank of Korea to raise interest rates at its meeting set for next week, but such hikes were expected to slow in pace as inflation is brought under control.

“We expect headline inflation to rise again in October. Gasoline prices will likely decline further, but city gas and power rates were raised at the beginning of October and fresh food prices will also probably rise ahead of winter,” said a report by Robert Carnell, regional head of research Asia-Pacific at ING.

Investors have been looking for signs that central banks might ease up on aggressive rate hikes aimed at taming the hottest inflation in four decades. The rate hike by Australia’s central bank was smaller than previous ones.

Economic growth is already slowing globally and the U.S. economy contracted during the first two quarters of the year, which is considered an informal signal of a recession.

Wall Street will get a more detailed look at employment in the U.S. this week, with a report on hiring by private companies due later Wednesday, the latest tally of weekly applications for unemployment benefits Thursday and the government’s monthly jobs report for September on Friday.

In energy trading, benchmark U.S. crude gained 73 cents to $87.25 a barrel in electronic trading on the New York Mercantile Exchange. It surged $2.89 to $86.52 on Tuesday. Brent crude, the international standard for pricing, advanced 73 cents to $92.53 a barrel.