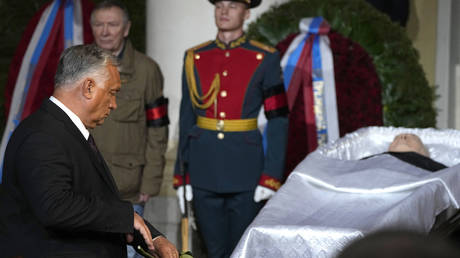 The Hungarian PM is in Moscow for the ceremony but no meeting with Putin is planned, the Kremlin said

Hungarian Prime Minister Viktor Orban is in Moscow for the funeral of former USSR president Mikhail Gorbachev, who died on August 30 aged 91. According to the Kremlin, there is no meeting planned between Orban and Russian President Vladimir Putin afterwards.

The Hungarian premier was among those paying their last respects to Gorbachev in Moscow’s House of the Unions on Saturday. He laid flowers at the base of the casket and then offered his condolences to the bereaved family.

The last leader of the Soviet Union passed away late on Tuesday at the age of 91. Gorbachev served as the general secretary of the USSR’s Central Committee of the Communist Party from 1985 to 1990, going on to become the first and last president of the USSR. He left the office after the country dissolved at the end of 1991.

As the USSR’s leader, Gorbachev launched sweeping reforms, known as perestroika, aimed at liberalizing the economy and public life. It was under his rule that the Berlin Wall fell and the Cold War came to an end – something for which he was awarded the Nobel Peace Prize in 1990.

His critics, however, blame him for the collapse of the Soviet Union and Moscow’s subsequent loss of prestige and global influence.

He will be buried in Moscow’s Novodevichy Cemetery next to his wife, Raisa, who died in 1999.