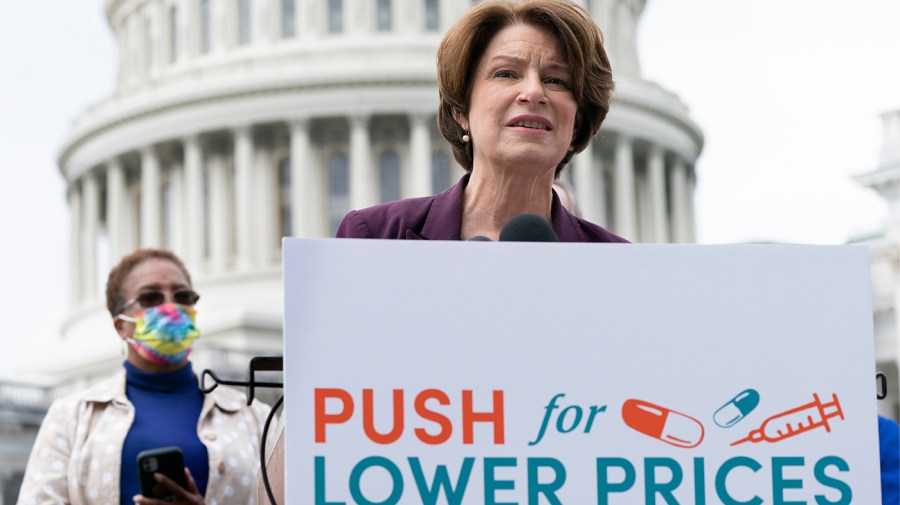 The powerful pharmaceutical industry is on the verge of a rare defeat in Congress, as Democrats say they have the votes to pass legislation targeting high drug costs.

After securing the support of Sen. Kyrsten Sinema (D-Ariz.) late Thursday, Senate Democrats appear poised to pass sweeping legislation that, among a host of climate and tax measures, would allow Medicare to negotiate the costs of some prescription drugs for the first time ever.

Democrats have sought for decades to allow Medicare to directly negotiate with drug companies as a way to bring down costs, starting with President Clinton’s ambitious health reform plan in 1993.

While relatively modest, the negotiation provision still represents a major victory for drug pricing advocates, and could give Democrats a boost heading into the midterm elections.

The idea is broadly supported by voters, but the industry has long fought off any efforts to impose what they see as price controls, even amid growing bipartisan anger over high drug costs.

The legislation would allow negotiations for up to 10 of the highest cost drugs beginning in 2026, with more allowed in later years. It is expected to save the federal government more than $100 billion.

Another provision would cap out-of-pocket costs for Medicare’s prescription drug benefit at $2,000, saving seniors thousands of dollars. The legislation also aims to prevent companies from massive pricing hikes by imposing rebates on manufacturers that increase prices faster than inflation.

According to the Kaiser Family Foundation, half of all drugs covered by Medicare had price increases above the rate of inflation from 2019 to 2020.

If the legislation passes, “this is a sea change. It’s going to change the trajectory of drug prices and drug price policy in the country,” said David Mitchell, president and founder of the advocacy group Patients for Affordable Drugs.

The legislation could pass the Senate as early as this weekend, assuming that the upper chamber’s parliamentarian says that the drug pricing provisions can be included under budget reconciliation rules, which allow Democrats to bypass the 60-vote legislative filibuster.

The prescription drug plan contains the most popular provisions in the reconciliation package, according to a recent Morning Consult-Politico poll. Roughly three out of four respondents expressed support for the drug pricing measures.

But the pharmaceutical industry is on pace to break lobbying records in its effort to oppose the legislation. According to Open Secrets, the industry has spent $187 million in the first half of 2022 alone.

The industry’s largest lobbying group, the Pharmaceutical Research and Manufacturers of America (PhRMA), sent a letter to every member of Congress on Thursday to urge them to vote against the legislation.

The letter largely reiterated the longstanding argument made by the industry group that the legislation would lead to government price controls and fewer cures available to Americans.

“This bill will not provide relief for families struggling with inflation or help the average American patient afford their medicines. It will be remembered as a historic mistake that devastated patients desperate for new cures,” Stephen Ubl, president and chief executive officer of PhRMA, wrote in the letter, which was also signed by the group’s 31 board members.

During a recent briefing, Ubl said the group is assessing its options, and indicated that even if the legislation passes, the industry won’t back down.

“We’re not going to take any option off the table. We’ll examine all legislative, regulatory, legal efforts to ensure patients continue to have access to medicines and our companies have the ability to develop them,” Ubl said.

Similar to the reconciliation provisions, it would have included a cap on seniors’ out-of-pocket drug costs in Medicare, and would have limited Medicare drug price increases to the rate of inflation. But the bill was never brought up for a vote.

Congress has also looked into stopping what lawmakers decry as anti-competitive industry practices, like raising prices in lockstep with competitors or manipulating patent laws to extend market exclusivity.

But even modest legislation has been opposed by drug companies.

Rachel Sachs, a law professor at Washington University in St. Louis, said she didn’t think there would be such a strong desire for regulation if drug companies hadn’t fought against every effort.

Sachs said “industry’s own failure to rein in its worst impulses” is to blame.

“We are now in a situation that’s not sustainable for patients or payers and it’s because of their own actions,” Sachs said.

Mitchell said if the legislation passes, it would pierce the pharmaceutical lobby’s veneer of invincibility.

“I do think that this struggle has been about power, and the drug companies have fought to keep their power to dictate prices,” Mitchell said. “The bite out of pharma from this legislation isn’t that big. It’s meaningful, but it’s not that big. But the idea that we are actually, actually curbing the power of that industry to dictate this to the American people is a very big deal.”

Stories You Might Have Missed This Week: PRX, Irene Cara &...

Sources: man dead after being stabbed in the neck at Somerville...

‘The Last Forbidden Kingdom’: How to Trek Nepal’s Mardi Himal