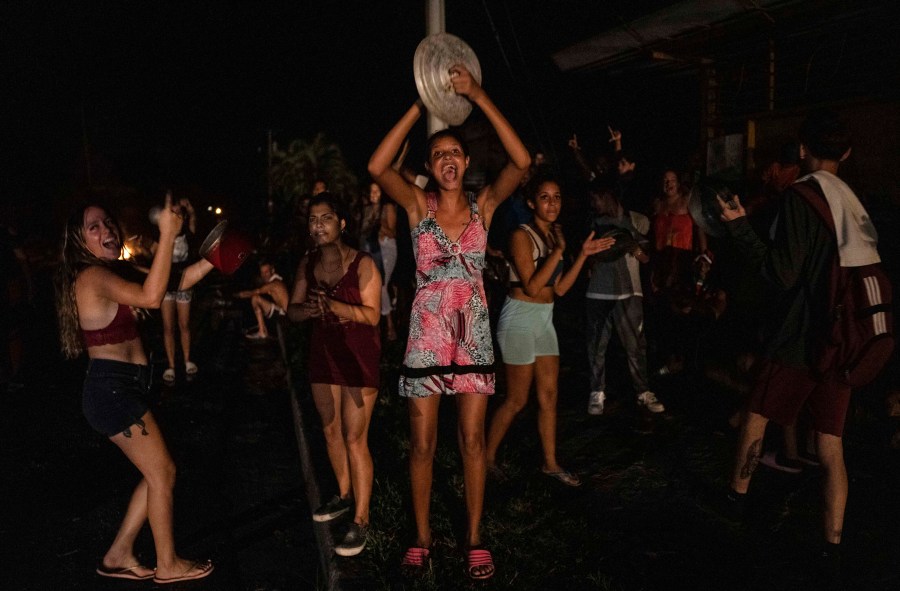 HAVANA (AP) — Groups of Cubans protested Friday night in the streets of Havana for a second night, decrying delays in fully restoring electricity three days after Hurricane Ian knocked out power across the island.

A foreign monitoring group reported that Cuba’s internet service shut down for the second time in two days, saying it appeared to be unrelated to problems from the storm but rather an attempt to keep information about the demonstrations from spreading.

Associated Press journalists saw people demonstrating in at least five spots in the city or on its outskirts, including the Barreras and La Gallega districts where residents blocked streets with burning tires and garbage.

Masiel Pereira, a housewife, said that “the only thing I ask is that they restore the current for my children.”

A neighbor, Yunior Velásquez, lamented that “all the food is about to be lost” because there was no power for refrigerators.

On Thursday night, people protested at two points in the city’s Cerro neighborhood. That area was mostly calm Friday with the power back on, although people were out on the important Villa Blanca Avenue chanting “We want light!” while banging pots with spoons. Police blocked access to the street, but there were no confrontations.

The country of 11 million people was plunged into darkness Tuesday night, a few hours after Ian roared over western Cuba and triggered problems in the power system that eventually cascaded over the whole island.

Power was restored in some parts of the country the next day, but other areas were left without service, including in the capital.

The government did not say what percentage of the overall population remained without electricity Friday, but electrical authorities said only 10% of Havana’s 2 million people had power as of late Thursday.

Internet and cellphone service also were out Thursday. Internet service returned Friday morning, at least in some areas, but in the evening it was interrupted again, groups monitoring access to the internet reported.

Alp Toker, director of London-based Netblocks, said the blackout in internet service on Thursday and Friday appeared different from an internet outage that occurred soon after Ian hit.

“Internet service has been interrupted once again in Cuba, at about the same time as yesterday (Thursday),” Toker said in an email to AP on Friday night. “The timing of the outages provides another indication that these are a measure to suppress coverage of the protests.”

Repeated blackouts on Cuba’s already fragile electric grid were among the causes of the island’s largest social protests in decades in July 2021. Thousands of people, weary of power failures and shortages of goods exacerbated by the pandemic and U.S. sanctions, turned out in cities across the island to vent their anger and some also lashed out at the government. Hundreds were arrested and prosecuted, prompting harsh criticism of the administration of President Miguel Diaz-Canel.

Experts said the total blackout showed the vulnerability of Cuba’s power grid and warned that it will require time and sources — things the country doesn’t have — to fix the problem.

Cuba’s power grid “was already in a critical and immunocompromised state as a result of the deterioration of the thermoelectric plants. The patient is now on life support,” said Jorge Piñon, director of the Center for International Energy and Environmental Policy’s Latin America and Caribbean program at the University of Texas.

Cuba has 13 power generation plants, eight of which are traditional thermoelectric plants, and five floating power plants rented from Turkey since 2019. There is also a group of small plants distributed throughout the country since an energy reform in 2006.

But the plants are poorly maintained, a phenomenon the government attributed to the lack of funds and U.S. sanctions. Complications in obtaining fuel is also a problem.