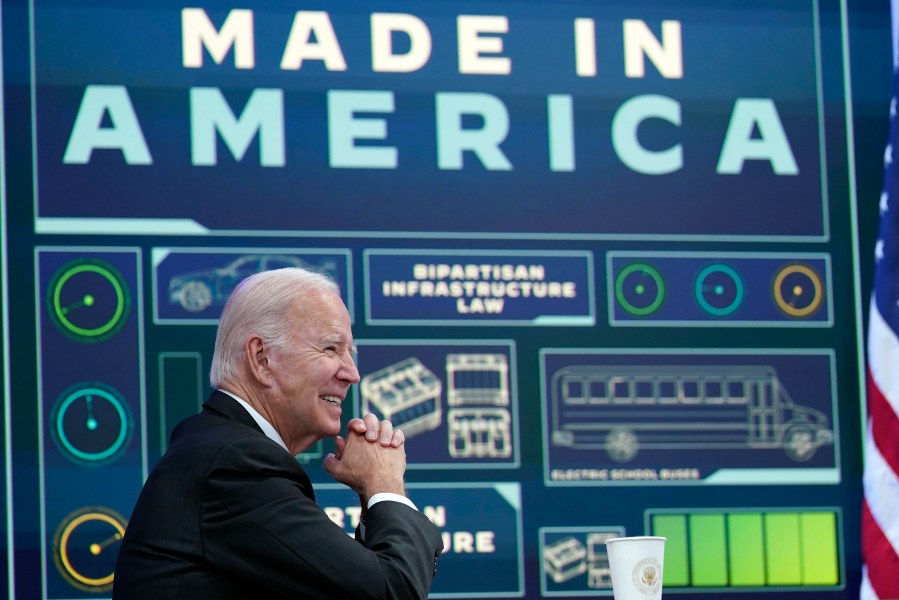 WASHINGTON (AP) — The Fern Hollow Bridge in Pittsburgh became a symbol of the country’s troubled infrastructure, collapsing into a ravine earlier this year just before President Joe Biden visited the city.

Biden detoured to survey the scene, where vehicles were stranded on shards of roadway and several people were injured, and he pledged that help was on the way.

The Democratic president hopes to turn the bridge into a symbol of success for his administration when he returns to Pittsburgh on Thursday, less than three weeks before the midterm elections.

A new span is being built, and it could be finished by December. The White House is crediting the bipartisan infrastructure law championed by Biden for the accelerated timeline.

The legislation is one of Biden’s most notable successes from the first two years of his term, and he repeatedly emphasizes its impact while traveling the country to roadways, airplane terminals and seaports.

Out of roughly $1 trillion in spending, about $40 billion is dedicated to bridges.

John Fetterman, the Democrat running for the U.S. Senate in Pennsylvania, is expected to be on hand when Biden visits the bridge.

Afterward, Biden plans to stop in Philadelphia for a fundraiser with Fetterman, trying to replenish coffers that have been drained in one of the year’s most expensive races.

Fetterman is competing with Dr. Mehmet Oz, a Republican, for an open seat being vacated by Sen. Pat Toomey, also a Republican. If Fetterman wins, Democrats will have a much better shot at maintaining control of the Senate.

Biden was born in Pennsylvania, and the state remains central to his political identity.

His trip on Thursday will be his 14th to the state since taking office. A 15th trip has already been scheduled for next week, when he’s expected to return to Philadelphia for another political event.