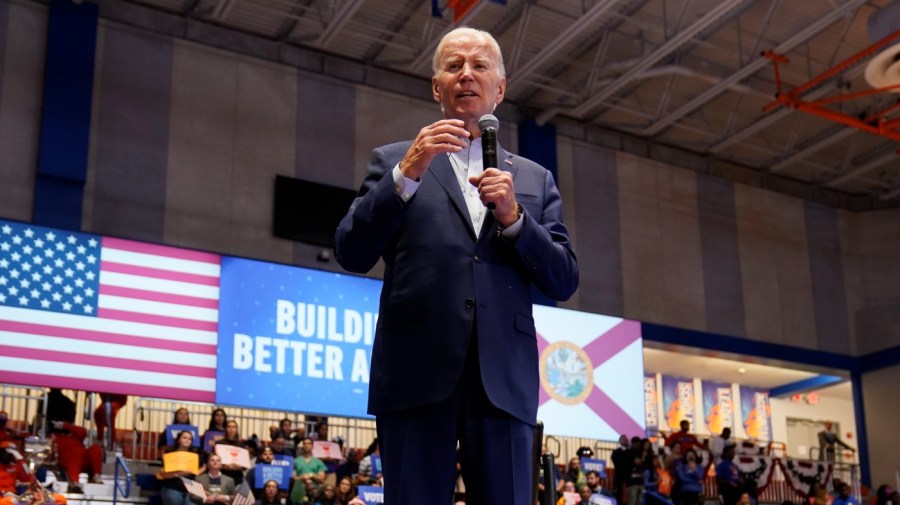 “Kevin McCarthy, he’s the leader of Republicans in the House of Representatives,” Biden said in remarks at Florida Memorial University in Miami Gardens. “The Republicans have — they’re saying it out loud now. They’re saying what they want to do. Thank God for small favors.”

He mentioned that Republicans want to end his administration’s policy that allows Medicare to negotiate drug prices and repeal the Obama-era Affordable Care Act. He also took aim at Sen. Rick Scott (R-Fla.), pointing to Scott’s agenda, released earlier this year, that included a proposal to sunset government programs every five years, meaning lawmakers would need to vote to extend Medicare and Social Security.

“Folks, this ain’t your father’s Republican Party. This is a different breed of cat,” Biden said.

“Their extremism isn’t limited to social programs and the economy. They’re coming after your right to vote and who gets to count the votes. For real. You’ve got 350 or so election deniers on the ballot, on the Republican ticket. This is really deadly earnest, man” he added.

His speech comes just a week before Election Day, which Biden called the most important election of our lifetime.

“Imagine Chief Demings on the beat in the United States Senate. I can hardly wait,” Biden said, referring to Demings’s former role as Orlando chief of police. “Folks, we need to elect Charlie and Val. We need to elect Democrats up and down the ballot.”

He rattled off Democratic accomplishments, including capping the price of insulin, lowering the cost of hearing aids, tax credits for weatherizing homes or buying electric vehicles, and his plan announced last week to eliminate so-called junk fees and require airlines to disclose all fees upfront.

He also mentioned that the bipartisan infrastructure law would provide a $16 million grant to the Port of Miami, taking aim at DeSantis and Rubio.

“I’m sure your governor will take credit for it somewhere along the line,” he said. “Val Demings voted for it. Her opponent voted against it.”

“What have Republicans done about this? Well, guess what. They moaned and groaned about it, and they challenged it in court, which they’re going to lose,” he said. “I don’t want to hear it from MAGA Republicans who sit in Congress.”

Crist and Demings spoke before Biden, as well as actors Jenifer Lewis and Keegan-Michael Key.

Both Crist and Demings face uphill fights to unseat their rivals. DeSantis has a comfortable lead over Crist and was leading by 14 points in a poll released last week. Rubio is also holding his edge over Demings, and a poll last month showed him with 47 percent support in the race, compared to Demings at 41 percent.

Biden spoke earlier on Tuesday evening at a reception for Crist in Golden Beach, Fla., where he described DeSantis as “Donald Trump incarnate.”

DeSantis could be a potential 2024 rival for Biden, and the two have had an adversarial relationship, clashing over DeSantis outlawing mask mandates in schools, passing legislation to restrict discussion of sexual orientation and sending migrants to Democratic areas.