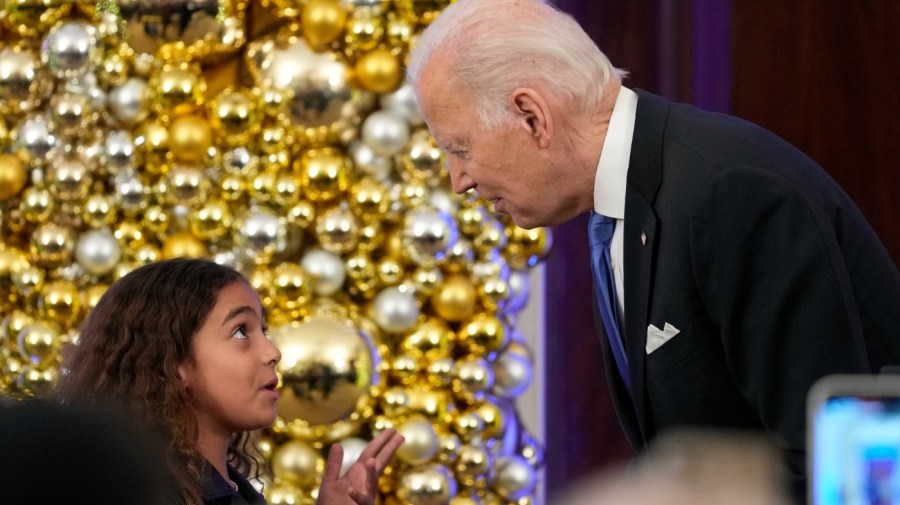 President Biden on Monday condemned a rise in antisemitism as “vile and venom” during a Hanukkah holiday reception at the White House.

“This year’s Hanukkah arrives in the midst of rising and emboldened of antisemitism — at home and, quite frankly, around the world. I recognize your fear, your hurt, your worry that this vile and venom is becoming too normal,” Biden said in the Grand Foyer of the White House.

Biden spoke to the gathered crowd from a podium between a Christmas tree and a new menorah, which first lady Jill Biden introduced as the first permanent White House menorah and the first Jewish artifact added permanently to the presidential collection.

The holiday festivities also included a blessing and a menorah lighting, according to a pool report.

Biden’s remarks come as lawmakers and the administration draw attention to an uptick in hateful rhetoric and violence directed at the Jewish community.

Former President Trump last month came under fire for hosting white nationalist and Holocaust denier Nick Fuentes at his Mar-a-Lago residence for a controversial dinner with rapper Ye, who has also made recent antisemitic comments and said he sees “good things” about Nazi leader Adolf Hitler.

“The Holocaust happened. Hitler was a demonic figure. And instead of giving it a platform, our political leaders should be calling out and rejecting antisemitism wherever it hides,” Biden wrote on Twitter after the dinner.

Second gentleman Doug Emhoff, who is Jewish, hosted a roundtable of Jewish leaders at the White House earlier this month to discuss antisemitism.

And last week, the Biden administration announced plans to set up an interagency task force to work on developing a national strategy to combat the issue.

“Today we must all say clearly and forcefully: Antisemitism and all forms of hate and violence in this country have no safe harbor in America,” Biden said on Monday.  “Evil will not win. Hate will not prevail.”