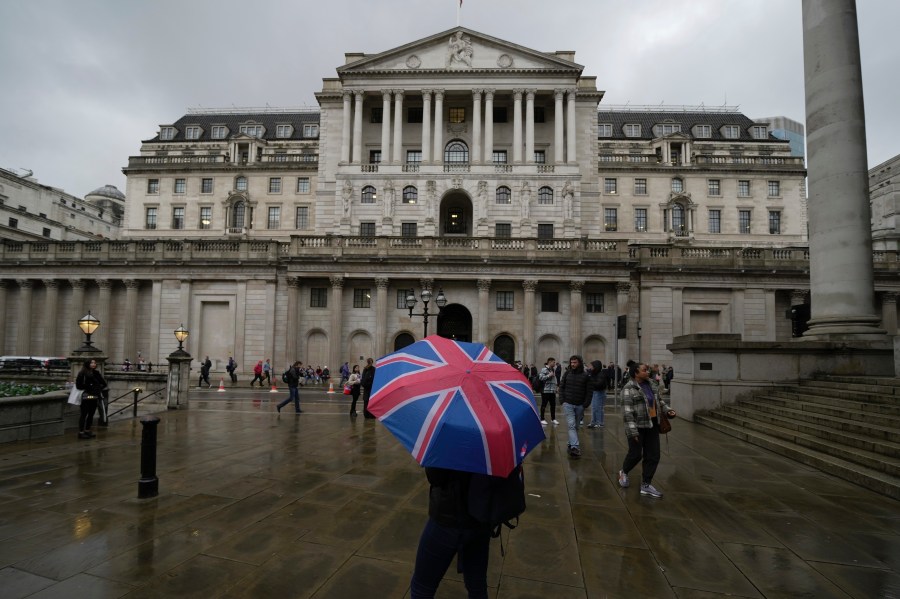 LONDON (AP) — Britain’s central bank on Thursday raised its key interest rate again but toned down the pace as inflation shows signs of easing, mirroring action by the U.S. Federal Reserve and ahead of an anticipated identical move by European policymakers.

The Bank of England raised the benchmark rate by half a percentage point, to 3.5%, the highest level in 14 years. It was the ninth consecutive increase since December 2021 and follows last month’s outsized three-quarter point hike, the biggest in 30 years.

This time, officials opted for less aggressive action after data this week showed inflation slipped from a 41-year high, but they warned that more hikes are likely to come.

The bank last month forecast a prolonged recession in the U.K. and consumer price inflation staying “very high” in the near term. Should that scenario play out, further rate increases “may be required for a sustainable return of inflation” to its 2% target, bank’s Monetary Policy Committee said.

“There are considerable uncertainties around the outlook,” the bank said. “The Committee continues to judge that, if the outlook suggests more persistent inflationary pressures, it will respond forcefully, as necessary.”

The Bank of England becomes the latest to fall in line with the Fed, which hiked its benchmark rate by the same amount Wednesday. Switzerland’s central bank followed suit with an identical move a day later, and the European Central Bank also is expected to approve a similar increase Thursday.

The U.K. central bank voted last month to raise its key rate by three quarters of a point, saying the aggressive move was needed to beat back stubbornly high inflation that’s eroding living standards and could trigger an extended recession.

Central banks worldwide have been battling to keep inflation under control, but Bank of England policymakers face extra pressure to strike the right balance because Britain’s economic outlook is worse than any other major economy.

The high cost of food and energy is eroding British households’ spending power while employers face pressure to boost wages to keep pace with inflation amid a nationwide wave of strikes by nurses, train drivers, postal workers, ambulance staff and others.

The Bank of England forecast last month that inflation would peak at around 11% in the last three months of the year, up from 10.1% in September. It said inflation should then start slowing next year, dropping below the bank’s 2% target within two years.

There were early signs that price spikes were easing, though inflation is still stuck near a 40-year high. Annual consumer price inflation dipped to 10.7% in November from 11.1% the previous month, according to official data released Wednesday.

“Overall, inflation has passed its peak and will continue to fall from here. That will prompt a sigh of relief” at the Bank of England’s headquarters, said Paul Dales, chief U.K. economist at Capital Economics.

But policymakers can’t be complacent because Britain’s economy is proving resilient and wage growth remains strong, he said in a research note.

“So interest rates are still going to be raised further, but the Bank will probably raise them at a slower rate” and they’ll top out at a lower-than-expected level, Dales said.