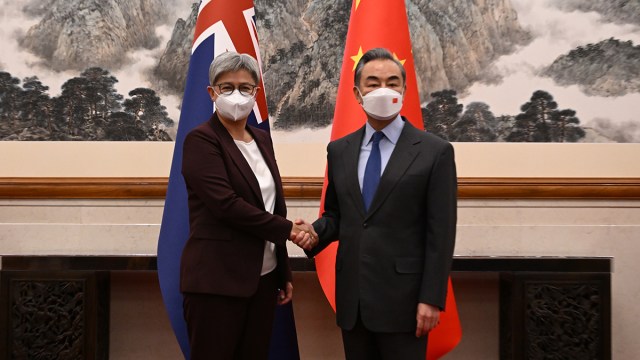 The Australian Foreign Minister’s visit to China has raised hopes the two countries are some way to repairing the relationship – but Senator Penny Wong has her work cut out for her.

Senator Wong held talks with her Chinese counterpart Wang Yi in Beijing this week on the 50th anniversary of diplomatic relations between Australia and China.

Following the meeting, Senator Wong reiterated her view that the countries could strengthen their relationship while upholding their respective national interests if their differences are navigated wisely.

“The government has made clear that we believe it’s in Australia’s interest for our relationship with China to be stabilised,” she said.

“We’ve also made clear we believe it is in China’s interest for the relationship to be stabilised.”

The talks, which followed a meeting between Prime Minister Anthony Albanese and President Xi Jinping at the G20 weeks earlier, represent a thawing in the frosty relationship.

The past few years saw the relationship sink to an all-time low when Chinese government officials refused phone calls from their Australian counterparts in 2020, and slapped restrictions on Australian exports such as wine and barley.

So far, the fruit of Australia-China talks has been the promise of more talks.

The countries also agreed to restart the 1.5 track High-Level Dialogue, the Australia-China CEO Roundtable and visits by bilateral business delegations.

Dr Herscovitch said at this point the key challenge for Senator Wong is to turn the restarting of dialogue between Beijing and Canberra into “tangible benefits” for Australia.

At front of mind would be having China lift its 2020 restrictions on Australian exports, which have cost the Australian economy billions of dollars.

Although Australia rushed to find other markets to replace the Chinese consumer, China kept its position as Australia’s largest two-way trade partner in 2021.

The Australian government must balance trying to appease the country while prioritising its own goals.

From calls for the release of Australian prisoners held in Chinese jails to China’s opposition of Australia’s pursuit of nuclear submarines, there is potential for talks to turn sour.

“Clearly, because China and Australia are at loggerheads on a whole host of different really pointy issues, it’s going to be really hard to do both of those things,” he said.

“It’s going to be a really difficult and delicate balancing act for the Australian government.”

He said it could be argued that Australia has already compromised by not pursuing previously stated aims to sanction Chinese officials.

Time to back up big talk

Prior to Labor taking power this year, Senator Wong advocated for the government to follow the lead of countries including the US and Canada in imposing sanctions against foreign companies and officials known to be directly profiting from Uyghur forced labour.

Australia did not follow suit at the time due to a lack of laws that would allow swift and targeted sanctions for human rights abuses – laws which Senator Wong advocated for in 2021.

Since Labor won the 2022 election, there has been no sign the party intends to introduce these sanctions on China, despite imposing similar sanctions on Iranian and Russian individuals.

Senator Wong said this week Australia would continue to advocate for China to observe and respect human rights, but Dr Herscovitch said the lack of sanctions shows Australia is already holding back in order to keep the relationship with China on the right track.

Whether Mr Albanese follows through on his opposition to Chinese ownership of the Port of Darwin will also be a telling factor.

“If they don’t tear up that lease, they’ll look soft on national security, and the Coalition will probably attack them pretty mercilessly on those grounds and hold Anthony Albanese to the standard of his past comments,” Dr Herscovitch said.

“If, on the other hand, they tear up that lease, then there’s a very good chance that would cause another significant downturn in the Australian-China relationship.

“Beijing right now is willing to talk and say we’re going to try and get the relationship going in the right direction. But Beijing doesn’t want Canberra to do high-profile provocative … things like tearing up leases because of security concerns that the Australian government might have.”

‘Normalisation’ not on the cards

Dr Herscovitch said while China is trying for a softer diplomatic approach, likely due to a realisation that its adversarial tactics weren’t working, pressure is ramping up from COVID-19 and countries like the US moving on the technological and economic front.

Ultimately, China is looking for friends. But the quick-to-offend country is not going to make things easy.

“We’re not going to go back to 2014 when President Xi Jinping was in the Australian Parliament, and everyone was waxing lyrical about the Australia-China relationship,” Dr Herscovitch said.

“That period of massively sunny side up diplomacy and really positive, warm relations is over.

“It’s going to be a much more antagonistic, much more fraught relationship … and there’s always the possibility that the relationship could explode at any point in time.”

The director of the University of Sydney’s China Studies Centre, David Goodman, said the ’normalisation’ of relations between Australia and China shouldn’t be hoped for, because there will always be restrictions.

“What kind of normalisation are we talking about?” Dr Goodman asked.

“Are we talking about a situation in which there is a free flow of goods, people and ideas between both countries?

“That’s not going to happen, because goods and people may move between the two countries, but ideas will not.

“The most we can hope for is free movement of people, investment and trade.”

Dr Goodman said the countries will have to adopt a strategy of “agreeing to disagree” over several issues to move forward.

“I wonder if there would be times when we wouldn’t talk to the United States.”

The post Australia-China talks under way, but relationship remains fraught and ripe to ‘explode’ appeared first on The New Daily.