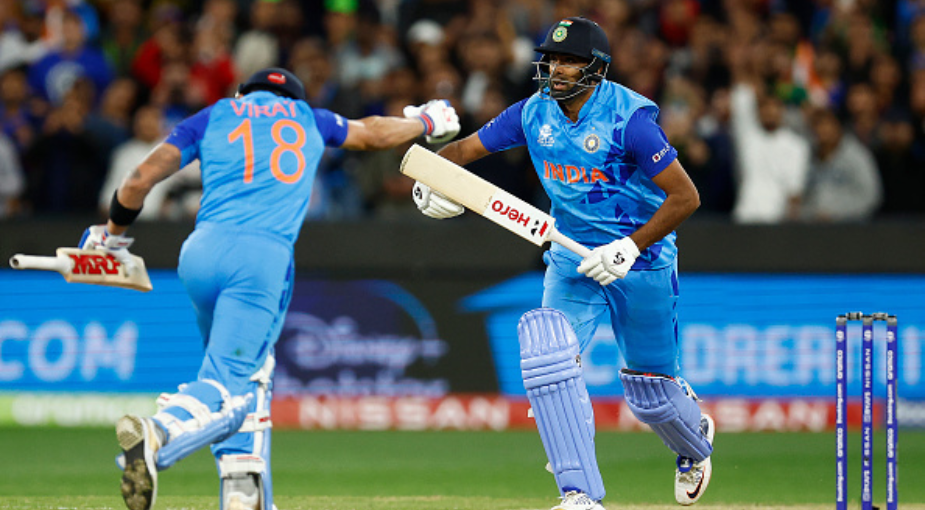 R Ashwin has recounted the dramatic game against India and Pakistan in the 2022 T20 World Cup that ended with him leaving a wide down leg side and then lofting the ball over mid-off to win “the greatest game” that he has been a part of.

India needed 160 to kickstart their T20 World Cup 2022 campaign on a high. At 31-4 in 6.1 overs, they seemed dead and buried, but what followed will go down in cricketing folklore. Virat Kohli played a stunning unbeaten 82 in 53, keeping India in the hunt even after the equation changed to 48 in 18 balls, and then 28 in eight.

With 16 to win off the last over, tensions were high. Mohammad Nawaz dismissed Hardik Pandya off the first ball, and Dinesh Karthik off the fifth, leaving India to score two from the final ball. Ashwin, the new batter, showed excellent game awareness to gauge the line of the wide ball and let it go before he hit the winning runs. He relived the moments, starting from Karthik’s untimely dismissal and laughed at how Kohli seemed to be possessed by a spirit during the epic knock.

On his YouTube channel, Ashwin hailed the match as “the greatest cricket game I have played or been a part of. It was extremely cold that day in MCG and it was hostile. It was extremely cold for a cricket match. Even while playing, our hands got extremely numb. They posted a score and I thought if we had restricted them to 140-odd, it would have been really nice. Because the ball was moving a bit early on. But still, with the batting strength we had, I thought we will chase it down very easily. And just when we felt a bit relaxed after that first over of Shaheen Shah Afridi where we survived without any damage, Haris Rauf bowled a sensational spell of fast bowling.”

Ashwin was generous in praise about the Pakistan team, in particular their bowling: “Pakistan, what a side they have got! Every time we played against them in the last 4 years, they have gone from strength to strength. They are playing some really good cricket. For that kind of epic game of cricket to happen, you need your opponent also to bring their ‘A’ game. For a fantastic game, their role is equally important. What a wonderful bowling display that was! Both Haris Rauf and Naseem Shah bowled like pros.”

Ashwin was in splits while discussing Kohli’s masterpiece, suggesting that the latter might have been influenced by supernatural elements. “I really think some spirit went inside him that day. What a knock! Leave alone the shots he played, after 45 balls, we saw the transformation from Genga to Chandramukhi. Just like how Jyothika becomes Chandramukhi and asks Prabhu, ‘Won’t you leave me?’” [referencing to P Vasu’s 2005 Tamil blockbuster, Chandramukhi]

It's basically from an famous Horror movie. Genga = human form Chandramukhi = when spirit goes inside

He then relived the nervy moments when he went in to bat with two needed of the last ball, and how he cursed Karthik for throwing him into that situation: “Virat was so pumped up and told me where to get those run. As I walked in to bat, I cursed Dinesh Karthik for a second and then later thought, ‘No, no. We still have time, let us do what we are here for.”

Easily, this was my longest walk to the centre of the ground. At least, I felt it that way. Einstein said in his theory of relativity, right? When you don’t like the place where you are, even one minute will look like one hour, whereas if you talk to the girl you like, one hour will seem like one minute. It seemed like I was walking for ages to get to the pitch.

“Then I saw Virat Kohli. He told me so many things. But I thought of only one thing to myself after seeing him: ‘God has given you so much today, so, how will he ever let me down? At least for you, won’t he let me get these runs?’

“I asked 4-5 questions like that. He replied, ‘Yes, he is bowling onto the legs, give some room and whack him over covers.’ I was like, ‘Whack? Dude, I have just come, and it is so freezing cold out here. [See] what the game situation [is] and you are calmly asking me to whack him over the extra cover?’ But then I thought, ‘how can I say this to a guy who is batting as if some spirit has gone inside him?’”

The wide took the pressure off Ashwin, who admitted to being relieved that his house would not be pelted with stones in case of a defeat: “The moment I saw the ball going down the leg side, I decided not to have any business playing it and decided to leave it alone and got one run for the wide. As soon as I got that one run, I got so relaxed. ‘Thank God, they won’t throw any stones at my place today. All I need to do now is to place the ball at some vacant area.’

“Again, I thought, ‘God has made this guy [Kohli] smash Haris Rauf over his head for a six on the backfoot, and over the square leg for another six with a flick. Won’t he allow my chip over the infield in some vacant area?’ And thank God, it did. But what a moment, seriously!”

The post Ashwin cursing Karthik, a ‘police investigation’ with Kohli and a well-left wide – The incidents that led to India’s last-ball MCG finish appeared first on Wisden.