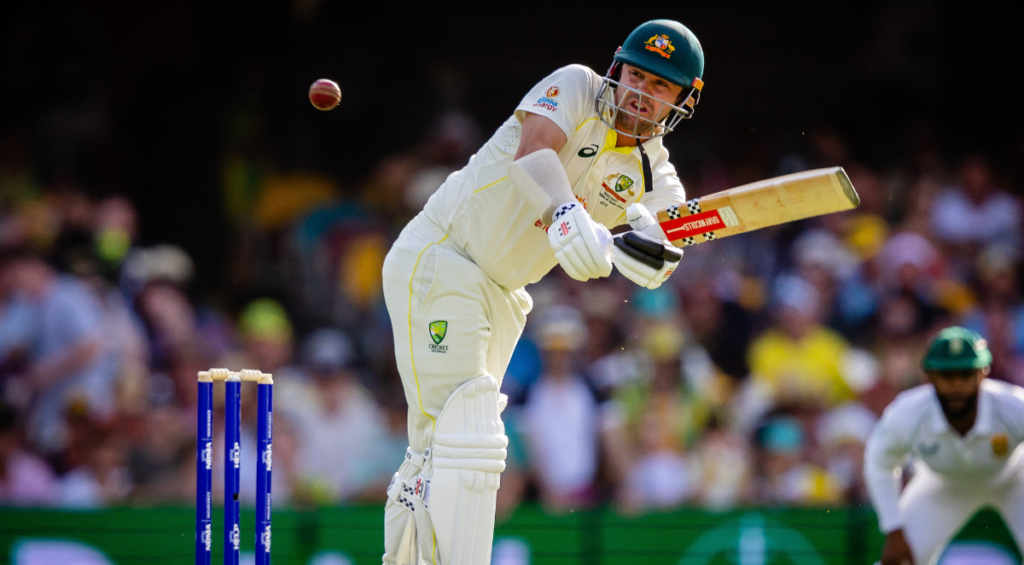 Travis Head played a brilliant counter-attacking innings for Australia in the final session of the first Test between Australia and South Africa, prompting journalists and commentators to liken him to Australia’s most-famous aggressive middle-order batter.

Having bowled South Africa out for 152, the Proteas struck back when it was their turn to bowl, taking three quick wickets after tea for just 27 runs. Steve Smith and Head set about steadying the innings with only an hour left in the day, Head scored just two runs off his first 16 balls before he unfurled a glorious back-foot drive for four off Anrich Nortje which began a stunning counter-attack. At the end of play, Head is 22 runs short of a sixth Test match century, having cracked 78 off 77 balls. His innings which included 13 fours and a six sparked comparisons to Gilchrist from those on commentary and online.

“That’s the mark of a great player,” said Shaun Pollock on commentary for Fox Cricket. “Much like Gilly used to do in his day. When he first came to the crease, those first 16 balls he had to absorb and now he realises, ‘Hang on, I can take this game by the scruff of the neck and put South Africa under immense pressure’.”

Gilchrist himself was also commentating on the match, replying to Pollock: “And risk-free. It’s been so controlled. There’s been no slogging about it. The maturity of his batting is what we’ve seen develop on his return to the Test team. He wanted to become more consistent and still play his natural game.”

On Twitter, two Australian journalists also made the comparison.

There’s a lot of Adam Gilchrist in the way Travis Head plays. Being a specialist batter there’s more of an expectation for Head to bat “responsibly”. Speaks volumes of the dressing room culture under Pat Cummins that he’s given the licence to play this way. #AUSvsSA

Likening an aggressive middle-order batter to Gilchrist is a regular occurrence. Modern wicketkeeper-batters have almost all had that comparison levied at them early in their careers, including the likes of Jos Buttler, Rishabh Pant and Quinton de Kock. Head doesn’t keep wicket, but his spree of aggressive centuries over the last 12 months, 85-balls against England at the Gabba, 112-balls against England at Hobart and 125-balls against the West Indies in Adelaide, have evoked memories of the counter-attacking legend who ripped up the Test cricket rule-book.

Gilchrist’s career strike rate was 81.95. Of those who played over fifty Tests batting in the top-seven, only Virender Sehwag scored his runs quicker. Head’s strike rate sits at 59.55 after 31 Tests, while his average is more comparable at 46.30. At the same stage in his Test match career, Gilchrist was averaging exactly 60 and striking at over 80 with six centuries. It should be noted that Head has massively increased his strike rate recently. Over the last two years he has struck at more than 80 after dropping in and out of the side for the first few years of his career.

Today, Australia were in danger of squandering a superb effort from their bowlers to skittle South Africa when Head accelerated, managing to put the South Africa bowlers off, what had been, their immaculate lengths. Head’s favour for playing off the back foot, cutting the ball and riding the bounce on Australian pitches does bring back memories of Gilchrist doing the same. Whether it be putting the opposition to the sword once the top order have already done their job, or changing the tempo of an innings after a collapse, both of them approach their work in a similar manner.

However, where Head at present differs most significantly from Gilchrist is his record away from home. All of Head’s five hundreds have come on home soil and his average plummets to 21.69 outside of Australia, his strike-rate falling to 48.70. He endured a difficult series in Sri Lanka earlier this year, passing ten only once in his three innings after what had been a difficult tour of Pakistan where he averaged 22.66. 11 of his 31 Test appearances have been away from home so far.

By contrast, Gilchrist’s record is marginally better away from home than in Australia. His average rises to more than fifty and his strike rate is similar. Ten of his 17 hundreds came in foreign conditions, and while he was sometimes troubled by spin in Asia, he scored four centuries from 15 Tests in the subcontinent.

With Gilchrist being as outstanding of a player as he was, comparisons will invariably always fall short. That doesn’t mean they’re unfounded, but it’s a mark of Gilchrist’s genius that no matter how excellent a player has been over a period of time or how sensational a counter-attacking innings has been, his record and position in the game means he always comes out on top. He is the unreachable benchmark by which they are all evaluated.

The post Are comparisons of Travis Head to Adam Gilchrist justified after his latest counter-attacking blitz? appeared first on Wisden.