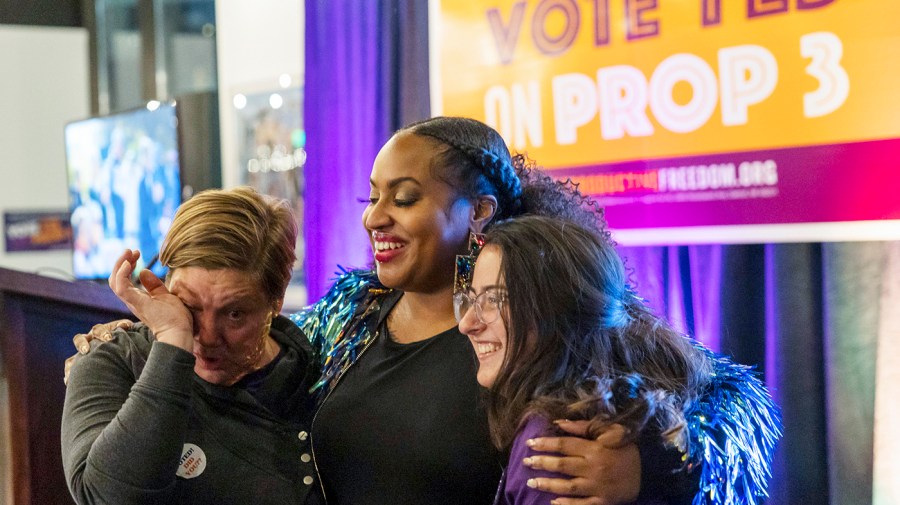 Voters across the country handed decisive victories to abortion rights advocates on Tuesday, as results from elections just months after the Supreme Court overturned Roe v. Wade showed access to abortion was a key issue for voters. Abortion rights groups are already looking to replicate their successes in 2024, while anti-abortion activists are regrouping.

Every state that put abortion on the ballot voted in favor of making sure the procedure is protected in some way, including Republican-leaning Kentucky. Voters there rejected a ballot measure aimed at denying any constitutional protections for abortion.

Abortion is still banned in the state, but the defeat of the ballot measure could give advocates challenging the law in court an opening to get it overturned. Had the measure passed, it would have amended the state constitution to clarify that it does not protect the right to abortion, making legal challenges to the law virtually impossible.

In Michigan, voters decisively approved a measure to put language guaranteeing the right to an abortion into the state constitution.

Abortion is legal in the state, but only because of temporary orders from judges. If the measure had failed, there was a possibility a 1931 law that bans abortion with no exceptions, including for rape or incest, and makes performing abortions a felony would take effect.

Michigan Gov. Gretchen Whitmer (D) won reelection Tuesday campaigning as a champion of abortion rights and painted the state as one that would serve as a haven for people living in neighboring states like Indiana and Ohio that have strict abortion limits.

“Abortion was, is, and will remain legal in Michigan,” Whitmer tweeted on Wednesday.

In Pennsylvania, Gov.-elect Josh Shapiro (D), who won his race by double-digits, has vowed to veto any anti-abortion legislation. Democrats were also on track to win control of the state House of Representatives, which would effectively block state Republicans from introducing a constitutional amendment banning abortions.

Abortion rights advocates were energized earlier this summer when voters in Kansas rejected an attempt to strip abortion protections from the state constitution, the first statewide vote on abortion since the Supreme Court’s decision.

They saw a second victory the following month when Democrat Pat Ryan, campaigning almost exclusively on abortion rights, won a special U.S. House election in New York. But in the months since, the economy had eclipsed abortion as the issue voters cared most about, according to polls, and conventional wisdom became that abortion would not be enough to propel Democrats to victory.

Advocates said Tuesday’s results show what happened in Kansas was not a fluke, and they want to make Michigan a bellwether.

This election cycle is the first time abortion rights groups have sponsored state ballot measures since 1992. According to data from Ballotpedia, 85 percent of the abortion-related measures on state ballots have been proposed by anti-abortion groups.

“We now see a clear path forward for defending the right to choice: through ballot measures,” said Kelly Hall, executive director of the Fairness Project, a progressive group that helps organize ballot measures.

“When voters have a chance to decide on this issue, they choose to protect their rights. Everyone deserves access to reproductive care, and we’re looking forward to building off this momentum to pass ballot measures to protect abortion rights wherever we can,” Hall said in a statement.

Sarah Standiford, national campaigns director at the Planned Parenthood Action Fund, said the Supreme Court’s decision was fresh in voters’ minds. They were angry over the loss of abortion rights, and she doesn’t see that changing.

“The dynamics did change after the Supreme Court ended a federal right to abortion, and that wave of anger and energy propelled interest in the election and it’s led to increases in voter registration, higher turnout, resounding victories, starting with Kansas and special elections over the summer and into what happened [Tuesday],” Standiford said.

“We will continue to propel and accelerate that interest. Voters overwhelmingly believe that personal, private medical decisions should be made by themselves, their families and their physicians, and not by politicians,” Standiford said.

According to the Kaiser Family Foundation, more than half of Democratic voters as well as female voters under age 50 said the Supreme Court overturning Roe had a “major impact” on which candidates they voted for.

An NBC News exit poll found that 61 percent of voters said they were dissatisfied or angry about the Supreme Court overturning Roe with its June decision in Dobbs v. Jackson Women’s Health Organization. Of that group, 71 percent identified as Democrats.

“In Kansas, there was no way for us to get to 50 percent without a coalition that included Republicans and unaffiliated, independent voters,” said Mini Timmaraju, president of NARAL Pro-Choice America.

“Abortion was a driving issue for our base, but also for some independents, and even some Republican suburban women. … Republicans would be very, very smart to pay attention to that, not push egregious abortion bans in states where they think they have an advantage,” Timmaraju said.

Maya Rupert, an executive at the Center for Reproductive Rights, said abortion access shouldn’t be viewed as a Democratic-only issue anymore.

“For a very long time, we’ve talked about abortion like it was this sort of uniquely partisan issue. And what voters are showing us is that it’s not,” Rupert said. “Across the country, across different states, geographies and party lines, when abortion was on the ballot, people voted for it, for access.”

On the other side of the issue, one of the leading anti-abortion groups is also looking ahead to 2024.

Marjorie Dannenfelser, president of Susan B. Anthony Pro-Life America, said the anti-abortion movement is much more successful when there is a strong candidate to personify the message, instead of a ballot measure.

Dannenfelser said Republicans knew that Democrats would be energized because of the Supreme Court’s decision, and the candidates should have embraced it.

The Supreme Court’s ruling led to a patchwork of state laws across the country, some of which are being litigated on a constantly changing basis.

Melissa Fowler, chief program officer at the National Abortion Federation, said she was encouraged by the midterm results, but managing the fallout post-Roe will take time.

“It’s going to take more than one election or any one court decision to really undo the harm that we’ve seen since the Dobbs decision and to build a future where there’s even more access than there was before Roe vs. Wade,” Fowler said.