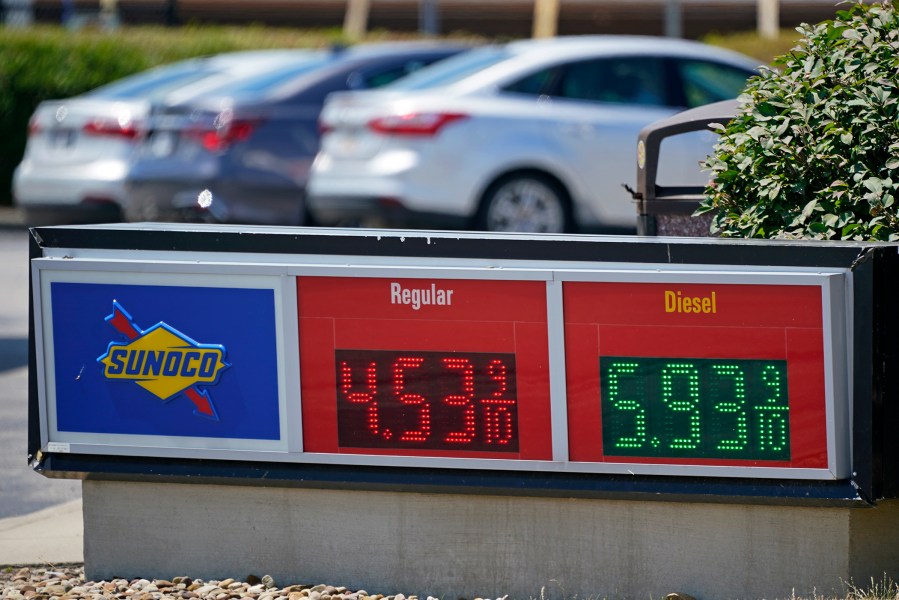 WASHINGTON (AP) — An inflation gauge that is closely tracked by the Federal Reserve jumped 6.8% in June from a year ago, the biggest increase in four decades, and leaving Americans with no relief from surging costs.

Friday’s figures from the Commerce Department underscored the persistence of the inflation that is eroding Americans’ purchasing power, dimming their confidence in the economy and threatening Democrats in Congress in the run-up to the November midterm elections.

On a month-to-month basis, prices rose 1% from May to June, faster than the 0.6% rise from April to May and the biggest such jump since 2005.

The government’s report also said that consumer spending managed to just outpace inflation, rising 0.1% from May to June after adjusting for price changes. Consumer spending has weakened in the face of high inflation. But it’s helping fuel inflation itself, with demand still strong for services ranging from airline tickets and hotel rooms to restaurant meals and new and used autos.

Inflation has been rising so fast that despite the pay raises many workers have received, most consumers are falling behind the pace of cost-of-living expenses.

High inflation and interest rates are also hampering the U.S. economy, which shrank in the April-June quarter for a second straight quarter, intensifying fears that a recession is looming. Two quarters of declining growth meet an informal rule of thumb for when a recession begins, although robust hiring suggests that the economy still maintains pockets of strength and isn’t yet in a downturn.

On Wednesday, the Fed raised its benchmark interest rate by three-quarters of a point for a second straight time in its most aggressive drive in more than three decades to tame high inflation. Chair Jerome Powell signaled that the Fed’s pace of rate increases might slow in the coming months.

Still, Powell stressed that the Fed’s policymakers regard the fight against inflation to be their top priority. He gave no hint that a weakening economy would cause the Fed to slow or reverse its rate hikes this year or early next year if inflation remained high.

By raising borrowing rates, the Fed makes it costlier to take out a mortgage or an auto or business loan. The goal is for consumers and businesses to borrow, spend and hire less, thereby cooling the economy and slowing inflation.

During the January-March quarter, consumers did increase their spending, even after adjusting for inflation. But the figure amounted to a meager 1% annual gain, down from 1.8% in the January-March period. At the same time, sharply higher mortgage rates have undercut the housing market: Sales of existing homes have sunk for five straight months, contributing to the economy’s contraction in the April-June quarter.

On Thursday, President Joe Biden rejected any notion that a recession had begun. Biden pointed to still-solid job growth, an unemployment rate near a half-century low and a spate of investments from semiconductor companies as evidence that the economy is still healthy.

Biden also welcomed an agreement forged by Senate Democrats on a slimmed-down version of his Build Back Better legislation, which many economists say could slow inflation over time. The bill would cut the government’s budget deficit, which restrains inflation by reducing overall demand. It would also reduce expenses for seniors by authorizing Medicare to negotiate the prices of some drugs.

Across the economy, soaring inflation was a consequence of the economy’s swift rebound from the pandemic recession of 2020. Government-fueled demand from vast stimulus aid, along with record-low borrowing rates and consumer savings built up during the pandemic overwhelmed factories, ports and freight yards. The resulting shortages of goods and labor sent prices spiking. Russia’s war against Ukraine further accelerated global prices for energy, food, fertilizer and other goods.

The Fed tends to monitor Friday’s inflation gauge, called the personal consumption expenditures price index, even more closely it does the government’s better-known consumer price index. Earlier this month, the CPI reported an acceleration in inflation, to 9.1% in June from a year earlier, the highest such reading in 41 years.

The PCE index, which tends to show a lower inflation level than CPI, is a broader measure of inflation that includes payments made on behalf of consumers, including medical services covered by insurance or government programs. The CPI covers only out-of-pocket costs, which in recent years have risen more. Rents, which are rising at their fastest pace in 35 years, are also given less weight in the PCE than in the CPI.

The PCE price index also seeks to account for changes in how people shop when inflation jumps. As a result, it can capture, for example, when consumers switch from pricey national brands to cheaper store brands.

Ontario’s wedding industry is swamped, but is a full recovery within reach?