South Westland is epic in size and majestically beautiful. It’s also one of only three places on earth where tectonic plates collide above sea level.

The weather, the ocean, the rivers, the forests, the skies and especially the people are all just a bit bolder than usual in the untamed, mountainous and wild region of South Westland. Such adjectives tantalize travelers preferring to avoid modernization and commercialization. This largely undisturbed landscape’s ecological and cultural features are significant enough to earn status as a UNESCO World Heritage site.

Its dramatic landforms result from the collision of two great tectonic plates; the Indo-Australian and Continental. There are only two other above-sea level sites on the planet where this happens.

The Tasman Sea pounds relentlessly on empty shingle beaches, lakes and wetlands host birds by the thousand and a rich mix of native beech, broadleaf and podocarp forests fill vast valleys against a backdrop of the snow-capped Southern Alps, all seldom seen by the human eye.

A solitary beachcomber might find scattered greenstone, freshly washed downriver by incessant rains, and stop to gawk in awe as the evening sun settles into the vast ocean blazing with crimson and ochre glory. It is an evening light show ranking among the best on the planet. 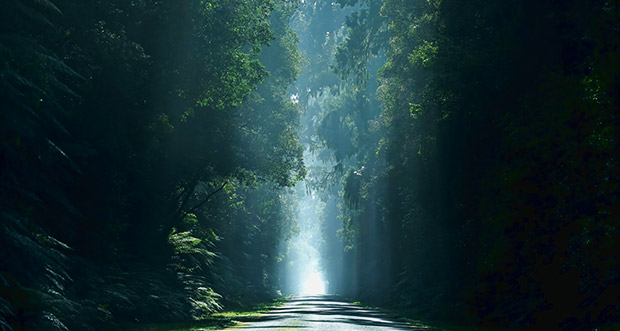 There is a dramatic remoteness in South Westland, with just a few hardy locals to make the adventurous very welcome. Still, nothing is handed to visitors on a plate here unless it’s a whitebait pattie. It has never been a place for soft creature comforts.

Two enthusiastic but misguided colonial attempts at creating settlements show just how tough it is to succeed in this remote region.

One was championed by James Macandrew of the Otago Provincial Council and encouraged colonial settlement near Lake McKerrow, six kilometres inland from the mouth of the Hollyford River at Martins Bay. Sending settlers into this wildly remote, bush-clad place with no regular supply of stores wasn’t the founding father’s finest hour, but they named the settlement after him anyway. It failed within 15 years, and today all that remains are a few raggedy rose bushes.

In the 1870s, the government tried to establish a settlement for European immigrants at Jackson Bay, south of the Haast River mouth. Willing souls were sold land and the dream of a bountiful life, but it couldn’t have been further from the truth. The more sensible arrivals refused to disembark from their ships, such were the harsh and isolated conditions of life they saw before them. Others tried to carve out a life at the bay, but it became a fight for survival for most.

The hazardous nature of the coast was at the heart of both failures. It was impossible to keep the settlements stocked with essentials without safe anchorages. Many died at Jacksons Bay trying to survive; others died trying to leave.

Haast is its largest settlement today and a good-as-gold town scattered over a 50-kilometre area ranging from Knights Point to the Cascade Valley. It’s New Zealand the way it used to be, a close-knit community bonded by the daily struggle of making a living from the land and the sea.

Everyone here knows everyone, and the town turns on a handshake and a beer.

The town is named after geologist Julius von Haast, who was responsible for the country’s earliest geological surveys and whose name is immortalized by the town and the inland pass route to Wānaka. In the 1950s and 1960s, the town hosted Ministry of Works road construction camps.

Today, it is home to about 300 people, a supermarket, gift shop and restaurants and the Department of Conservation Visitor Centre on the corner of SH6 and Jackson Bay Road. This is as good a place as anywhere to start any adventure. 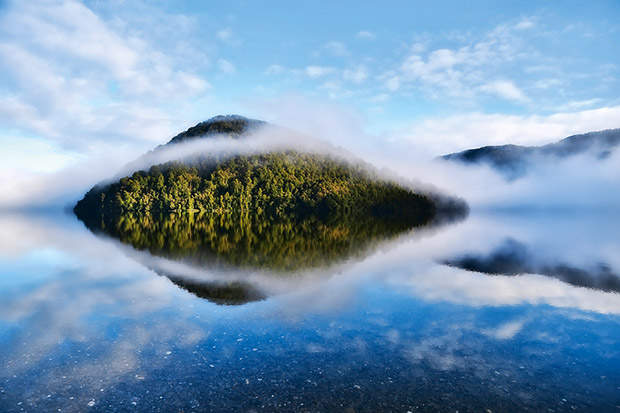 On the coast and an hour’s drive south of Fox Glacier is Lake Paringa – the northernmost of a brace of glacial carved lakes.

Historically, farmers from the Landsborough and Cascade Valleys used the Haast-Paringa Track to drive their cattle north to Whataroa for sale, with the last mob completing the long journey as late as 1961. Reopened as a heritage walk in the 1980s, it’s a three-day tramp with hut stays along the way. The lake itself is a bijou gem, well known among anglers as an excellent salmon and brown trout fishing ground.

There’s not much beyond the Lake Paringa Lodge, and a small lakeside DOC camping ground with toilet facilities, but a short drive north is the South Westland Salmon Farm, with its café and shop. 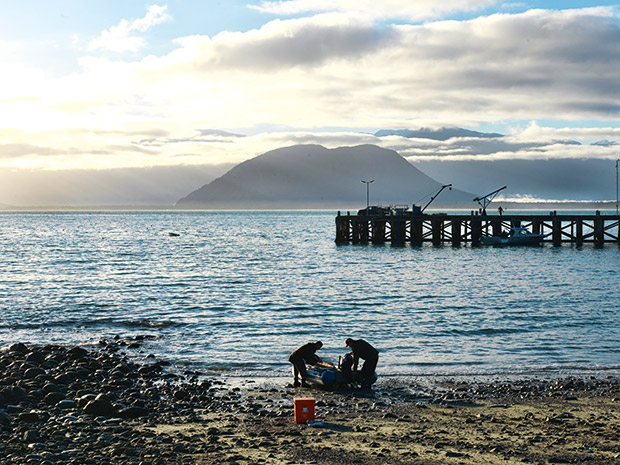 Not many people live at Jackson Bay, but an awful lot has happened here. Captain Cook visited, naming this natural harbour Open Bay. Its current name is believed to have come from a sealer, William Jackson, who was among a group marooned on a nearby island in 1810.

It was the scene of a failed development in the 1870s, scuppered by a lack of access to regular supplies. The promised wharf wasn’t built until the 1930s, and no road came this way until 1960. So, it’s hardly surprising that the strong pioneering spirit survives. Today, fishing boats ply their trade in the harbour, and there is a small processing factory. The place for a delicious seafood meal is The Cray Pot on The Esplanade (open September to Easter).

Look out for rare hector’s dolphins while enjoying the tucker, and watch for the salty, unshaven seadogs (otherwise known as fishermen) as they go about their work. For a rocky seashore experience with the promise of tidal pools and nesting penguins, try the Wharekai-Te Kou Walk or the Smoothwater Bay Track, both picturesque. Tucked under Mt Shrimpton, 80 kilometres south of Haast on the border of Mt Aspiring National Park, Makarora is a busy hub for back-country adventures such as heli-skiing, heli-tramping and heli-jet boating. There’s accommodation, a café and petrol.

The small scale and remoteness of Makarora belie all that goes on here. There are brown and rainbow trout in the rivers and deer in the hills, joyous bird song, mountain spring water, the sense of being able to reach up to touch the stars at night, glow-worms, and rain on an iron roof.
The wider region is also a walker’s paradise.

The Gillespie Pass Track is an excellent three- to four-day circuit for experienced trampers, and the four-bunk Cameron Hut is a four- to five-hour tramp in the spectacular Cameron Valley. The Blue Pools are an easy walk near the highway, eight kilometres north of town. Big Bay, between Jackson Bay and Milford Sound on the border between Westland and Southland, is elemental, windswept, ruggedly beautiful and accessible only on foot (or helicopter, plane or boat). Hundreds of goldminers, encouraged by the provincial government and led by prominent prospector Bill Fox, made it a short-term home. Sawmills sprang up to cater to the settlement, but the loggers and the miners departed when the gold dried up, leaving Big Bay to God and the sandflies.

Today, it’s a favourite haunt of hunters and tired trampers who end the Hollyford Track at neighbouring Martin Bay. The occasional heli-surfer arrives to ride that perfect big wave at the bottom of the world.

A cluster of nine private huts on conservation land speak of the love of whitebaiting and are the subject of ongoing debate between the conservation authorities and the owners. Coast dune systems running from Big Bay north are of national significance for their biological values. At the northernmost border of South Westland near Jacobs River, is one of the few points on the drive south from the glaciers that allows a sweeping vista of the magnificent Tasman Sea.

In 2014, Bruce Bay was named one of New Zealand’s 10 most-loved beaches. It is a small settlement with a marae, Te Tauraka Waka a Māui (the Landing Place of Māui’s Canoe), referencing the myth that Māui first landed his canoe here after dispatching two taniwha standing guard at either end of the bay. Be warned: the sandflies here are big enough and bad enough to pick up people and fly them away. Ship Creek is named for the wreckage of a clipper that sank off the coast of Australia near Melbourne but washed up on the beach here. Years ago, of course. There are two excellent walks and jaw-droppingly gorgeous views of swamp, forest and ocean. 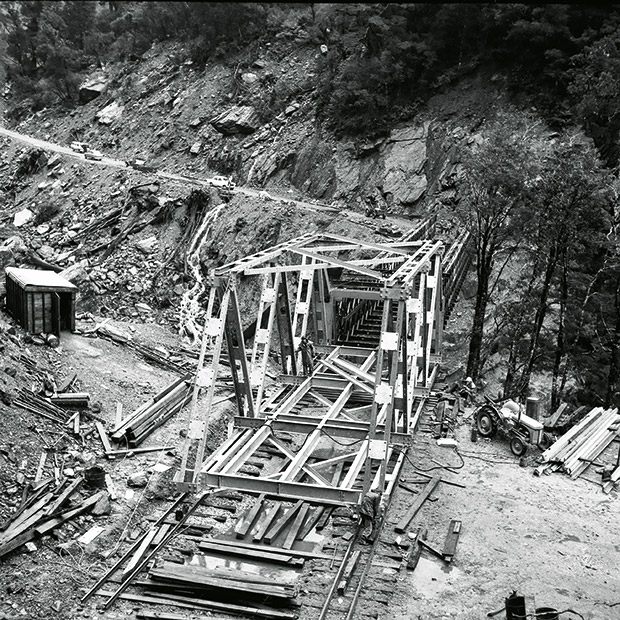 It’s 6 November 1965, Knights Point, and the official opening of the Haast Highway. The Prime Minister’s wife, Norma Holyoake, cuts the ribbon, and the rain comes down in sheets. Within hours, the road is closed due to slips.

It was a damp squib of an ending to one of New Zealand’s greatest road-building projects — and one of the most protracted. The effort to push a road through Haast Pass had commenced between the wars, then ground to a halt after World War II, to be resurrected during major national-infrastructure development in the 1950s. The pass was hard going, and there were plenty of delays, but in 1960, the link to Haast from the Otago side — stage one of the vision — was finally completed.

During the next five years, two Ministry of Works road-building teams, one moving up the coast from the Haast end, the other coming south from Paringa, worked to complete the link to the north.

The opening up of South Westland to road traffic changed life dramatically. Mail and supplies had been flown in from Hokitika daily, cattle were driven north to the sale yards at Whataroa (a three-week journey), and the Catholic priest did the same trip in reverse on horseback, saying mass along the way. “When the road went through, we all bought fridges. Before then, everyone had a milking cow, and everything went into the meat safe,” recalled Neroli Nolan, who was 10 at the time.

The road is one of only three that crosses the Southern Alps and one of the country’s most incredible drives — all about waterfalls and rain forest.

WHO WAS JULIUS VON HAAST? This large and extremely capable German geologist was employed by a British shipping company to report on prospects for German settlement in New Zealand. He arrived in 1858 and became extremely useful to the development of the new colony.

He explored widely, particularly in the South Island, determining the extent of gold and coal on the West Coast, the headwaters of the Canterbury rivers and the tunnel-ability of the land between Lyttleton and Christchurch (and got it right).

He “discovered” the Haast Pass in 1863, although an explorer named Cameron might have been the first colonist to do so. He named the Franz Josef Glacier, predicted the useful aquifers beneath the Canterbury Plains and was influential in establishing the Canterbury Museum and Christ’s College — plus he had two wives and four children. He played the violin very well and, rather delightfully, was described as “a boy in heart until the day he died”. A very productive citizen indeed.

The post 6 highlights and hidden gems in South Westland appeared first on thisNZlife.